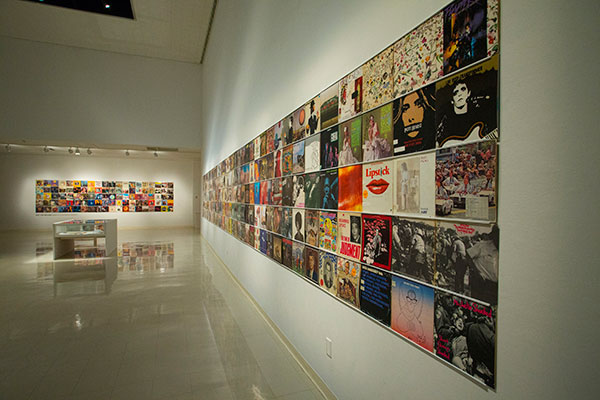 A colorful and provocative exhibit at Paul W. Zuccaire Gallery tells the story of Stony Brook’s longtime engagement with classic pop music via a collection of album covers from the library of the university’s radio station, WUSB.

As renovation on the Stony Brook Student Union — which houses the campus radio station — approaches, WUSB personnel packed up archives of vinyl and acetate record albums. WUSB disc jockey and Staller Center Outreach Director Paul Newland mentioned to his colleague, Karen Levitov, director and curator of Zuccaire Gallery, that the radio station was temporarily storing the treasured collection for an anticipated move to West Dining, possibly as early as 2017.

For Levitov, the mention of the storied cover art sparked an idea. The gallery staff had been looking for a follow-up to last year’s Vintage Film Poster exhibition, which made its debut in conjunction with the 20th anniversary of the Stony Brook Film Festival. Therefore, an exhibition displaying the iconic albums owned by the radio station seemed to fill that need.

WUSB General Manager Isobel Breheny Schaefer embraced the idea. “This seemed like the perfect way to highlight the great music library at WUSB and keep the longtime student radio experiment reaching far beyond the Stony Brook community,” she said.

This year’s exhibit, titled “On the Record: Album Cover Art,” highlighting Stony Brook University’s historic link to its rich musical past, would have its own musical tie-in — the 40th anniversary of the monster Billboard hit “Don’t Fear the Reaper” by Blue Öyster Cult, a band with a major Stony Brook connection.

Norm Prusslin, a founding general manager of WUSB Radio, co-founder of the Long Island Music Hall of Fame and a Stony Brook professor, said that a Stony Brook student and one-time student government president, Sandy Pearlman ’66, who later became a rock critic at Crawdaddy, not only helped found Blue Öyster Cult, but also came up with the band name, which was derived from his science fiction writings.

Pearlman recently passed away at the age of 72, but he left an indelible mark on the University’s music history by identifying a local band that had star potential.

The band that became Blue Öyster Cult caught his attention when its core members rehearsed and jammed with a changing lineup at a house near the University. Pearlman used his contacts in the local and national scene to help jump-start the group’s career.

Another former Stony Brook student, Bill Gawlik, was responsible for the band’s logo, which is the symbol of Kronos (Saturn) and for the band’s umlaut over the letter o. He developed the symbol as part of his master’s thesis. The band hired him to do the cover artwork for its first two albums.

On July 22, Prusslin held a Q & A with founding Blue Öyster Cult member Albert Bouchard, who discussed the band’s origins as well as the iconic logos, images and designs that appear on the band’s classic albums.

This artwork is among more than 1,000 album covers created by famous graphic designers, photographers and artists featured in the Zuccaire Gallery exhibit. The selection process for the covers began in February. That’s when WUSB and gallery staffers pulled records and lobbied for their choices based on visual appeal, popularity and artistic integrity.

From there, the group, consisting of five WUSB staffers, five gallery employees, a handful of Staller Center staffers and several students, spread the albums out on the floor as they made their final selections and arranged them over a month’s time.

Emily Sobel, WUSB program director and president, said that the station has more than 40,000 vinyl records and upward of 65,000 compact discs in its collection. She emphasized the difficulty of narrowing the final choices for the exhibit.

To be sure, the show reflects the diversity of WUSB’s programming. “The covers are not arranged chronologically or by genre, so there’s this element of surprise as you come across certain cover art,” said Levitov. “It’s fun to walk through with people who have said, ‘Oh, I love this,’ or ‘My mom had this one.’ ’’

In addition to WUSB’s contributions, the exhibit contains the album art of 15 private lenders.

There are also some rarities. Samantha Clink, community relations assistant for the gallery and one of the co-curators of the exhibition, researched the Beatles in graduate school, and referred to a pair of album covers by the Fab Four that are on display — the 11th American LP, “Yesterday and Today,” with both the controversial cover showing butchered meat and dismembered baby dolls and its conventional successor on display.

In one corner of the exhibit, there is a section devoted to 100 of the performers who graced Stony Brook stages during the University’s musical heyday. According to Newland, that is only a fraction of the number of musical acts — both up-and-coming bands and established acts — that have thrilled audiences at Long Island’s former musical mecca.

No one knows this better than Stony Brook alumnus Howie Klein ’69 , the retired president of Reprise Records.

“During Stony Brook’s early days, we booked just about everyone but the Rolling Stones and the Beatles,” he said.