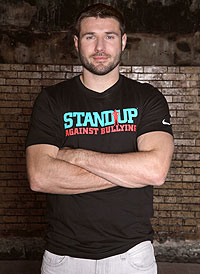 Ben Cohen, MBE, is among the world’s greatest athletes. An England Rugby World Cup champion, he is second in all-time scoring for his country and first among straight athletes to focus his philanthropic efforts for the benefit of LGBT people. In May 2011, Cohen retired at the top of his game to found the Ben Cohen StandUp Foundation, the world’s first foundation dedicated to raising awareness of the long-term, damaging effects of bullying, and funding those doing real-world work to stop it. As chairman of the foundation, Cohen travels worldwide speaking to students and corporations about the importance of character, respect and equality in creating a kinder world. The cause is close to his heart, as Cohen’s own father was beaten to death when he stood up for an employee who was being attacked. Cohen has reached millions of people with his message through global media coverage, films and nearly 300,000 followers on social media. With his leadership, cities across the U.S. have passed StandUp declarations, calling for an end to bullying. Working with the UK Home Office, he has led the charge for the StandUp Charter to end homophobia across sports in his country, including broad adoption to date in soccer, rugby and tennis.

Abstract: Ben Cohen will share his thoughts about being a champion on the field and off the field. As a World Cup champion, Cohen retired for a cause and wants to be on the right side of history with the efforts for equality and respect for all. He will share his personal and professional experiences and how this has translated into standing up for others and to being the chairman of the world’s first foundation dedicated to anti-bullying and removing homophobia from sports.

Questions for Ben Cohen? We encourage you to submit questions at bencohenlecture@stonybrook.edu.

This Provost’s Lecture, co-sponsored by the Stony Brook University Department of Athletics and the America East Conference, will be held on Tuesday, October 9, at 4 pm on Staller Center’s Main Stage.