May 3 Provost’s Lecture with Jonathan Israel 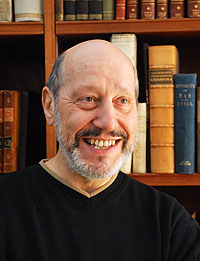 Jonathan Israel has written on Dutch and Spanish history, the Age of Enlightenment and European Jewry. He was appointed Professor of Modern European History in the School of Historical Studies at the Institute for Advanced Study, Princeton in January 2001. He was previously Professor of Dutch History and Institutions at the University of London (1984-2000). His books include European Jewry in the Age of Mercantilism, 1550–1750 (1985); The Dutch Republic. Its Rise, Greatness and Fall, 1477–1806 (1995); Radical Enlightenment: Philosophy and the Making of Modernity, 1650–1750 (2001); Enlightenment Contested: Philosophy, Modernity, and the Emancipation of Man 1670–1752 (2006); In strijd met Spinoza, Het failliet van de Nederlandse Verlichting (1670-1800) (2007); A Revolution of the Mind: Radical Enlightenment and the Intellectual Origins of Modern Democracy (2010); Democratic Enlightenment: Philosophy, Revolution, and Human Rights (1750-1790) (2011). His recent work focuses on the impact of radical thought (especially Spinoza, Bayle, Diderot and the eighteenth century French materialists), and on the Enlightenment and emergence of modern ideas of democracy, equality, toleration, freedom of the press and individual freedom.

Abstract: Although most of the British public and eventually much American opinion was strongly averse to the French Revolution and its ideology, among writers, poets and intellectuals the position, until 1793 at any rate, was very different. The main tendency among this constituency seems to have been to follow Tom Paine and Joseph Priestley and adopt an attitude of enthusiastic support rather than to echo Edmund Burke and reject the Revolution. This lecture seeks to explain the enthusiasm of the (isolated and soon highly unpopular) Anglo-American intellegentsia for the principles of the Revolution and assess the significance of this phenomenon.

This Provost’s Lecture, co-sponsored by the Philosophy Department, will be held on Thursday, May 3, from 5 pm to 7 pm in Harriman Hall 214.