Margaret Jay Examines Politics on Both Sides of the Pond 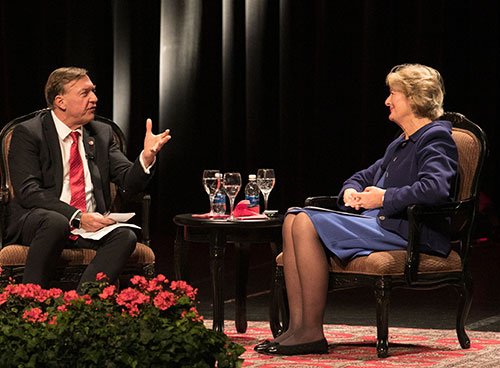 Politics has become a transatlantic phenomenon in today’s interconnected world, acknowledged Britain’s former Leader of the House of Lords and Minister for Women Margaret Jay in an October 11 Presidential  Lecture entitled “The New Populism in America and Britain: What Has Happened to Our Politics?”

Jay, the Right Honorable the Baroness Jay of Paddington, Labour politician and former broadcast journalist, is a pioneer of women’s issues and has longstanding interests in health and constitutional affairs.

In her lecture, Jay compared Britain’s recent vote to leave the EU, popularly known as “Brexit,” to the populist upsurge reflected in the current US Presidential campaign.

Stony Brook University President Samuel L. Stanley, who introduced Jay and led a lively discussion following her lecture, described a resurgence of “nativist, anti-immigrant feelings” in the U.S. and pointed to a “breakdown in civility” that appears to be impacting the 2016 election year.

“In the United Kingdom, we’ve just decided to leave the European Union, which has guaranteed both the peace and the prosperity of that continent for many decades,” Jay said. “Here you’re faced with a choice between the two most unpopular candidates ever, and immersed in a campaign that is unprecedented and ugly.”

Referencing Jay’s record as an advocate for women’s rights, Stony Brook University President Samuel L. Stanley Jr., MD, described SBU’s work as part of the UN HeForShe initiative for gender equality and asked whether the U.S. may trailing the Britain in progress on gender issues. Jay responded that Britain had traditionally looked toward the US for guidance and inspiration in the area of gender equality.

Jay concluded with a call to citizens on both sides of the Atlantic to “fight harder for the center.”

“It may seem more boring, but it’s also more responsible,” she said. 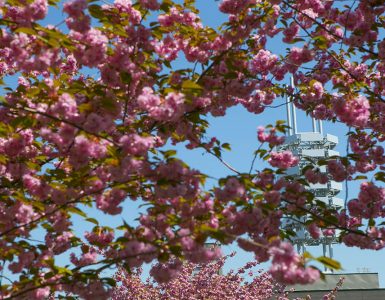