March 30 Provost’s Lecture on Life and Evolution as Physics 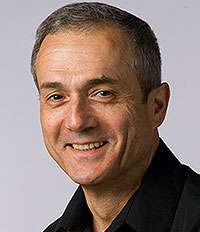 Adrian Bejan is J.A. Jones Distinguished Professor of Mechanical Engineering at Duke University. His research covers engineering science and applied physics: thermodynamics, heat transfer, fluid mechanics, convection and porous media. More recently, he developed the constructal law of organization and evolution in nature. Professor Bejan was ranked in 2001 among the 100 most highly cited authors worldwide in engineering (all fields, all countries) by the Institute for Scientific Information. He has received 18 honorary doctorates from universities in 11 countries and is the author of 30 books and more than 600 peer-referred articles.

Abstract: What is evolution and why does it exist in the geophysical, biological, social and technological realms — in short, everywhere? Why is there a time direction — a time arrow — in the changes we know are happening every moment and everywhere? These are questions of physics, about everything. The physics answer is that nothing lives, flows, moves and morphs unless it is driven by power and has freedom to change. The power is destroyed by the flows, and the flow architectures evolve into configurations that provide progressively greater access for movement. The universal natural tendency to “evolve” was placed in physics by the constructal law (1996). This lecture will show why this law is useful to us. We are the evolving “human and machine species.” Evolution can be put to use in our lifetime in technology, transportation, urban design, spreading and collecting, miniaturization, communications, science, government and the unstoppable march to freedom, access, wealth and knowledge.

This Provost’s Lecture, co-sponsored by the College of Engineering and Applied Sciences and the Department of Mechanical Engineering, will be held on Thursday, March 30, at 4 pm in the Simons Center Della Pietra Family Auditorium.