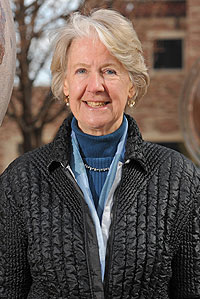 Situating Moral Justification: Rethinking the Mission of Moral Epistemology
Alison Jaggar is College Professor of Distinction in Philosophy and Women and Gender Studies at the University of Colorado at Boulder. Jaggar works in the areas of contemporary social, moral and political philosophy, often from a feminist perspective. In the past decade, her work has introduced gender as a category of analysis into the philosophical debate on global justice. Jaggar is a member of a Fempov, a multidisciplinary and international research team whose aim is to produce a new poverty standard or metric capable of revealing the gendered dimensions of global poverty. In addition, Jaggar is exploring the potential of a naturalized approach to moral epistemology for addressing moral disputes in contexts of inequality and cultural difference.

Abstract: This lecture draws from a larger project, co-authored with Theresa Tobin of Marquette University. Tobin’s and my overall goal is to understand how moral claims may be rationally justified in a world characterized by cultural diversity and social inequality. Our larger work proposes a distinctive way of naturalizing moral epistemology. To show why an alternative approach is needed, we argue that the currently most influential philosophical accounts of moral justification all lend themselves to rationalizing the moral claims of those with more social power. The present lecture explains how the specific account given by discourse ethics is flawed just in this way. I begin by identifying several conditions of adequacy for assessing reasoning practices designed to achieve moral justification and use these conditions to evaluate the practice of reasoning recommended by discourse ethics. I argue that discourse ethics fails the conditions of adequacy and that, in contexts of cultural diversity and social inequality, it lends itself to rationalizing the moral claims of those with more social power. I then argue that the failure of discourse ethics is rooted in its reliance on a broader conception of moral epistemology that is invidiously idealized. The lecture concludes by pointing to the need to rethink both the mission and method of moral epistemology.

This Provost’s Lecture, co-sponsored by the Department of Philosophy, the journal Metaphilosophy and the Department of Cultural Analysis and Theory, will be held on Thursday, March 14, at 5:30 pm in Harriman Hall, Room 214.