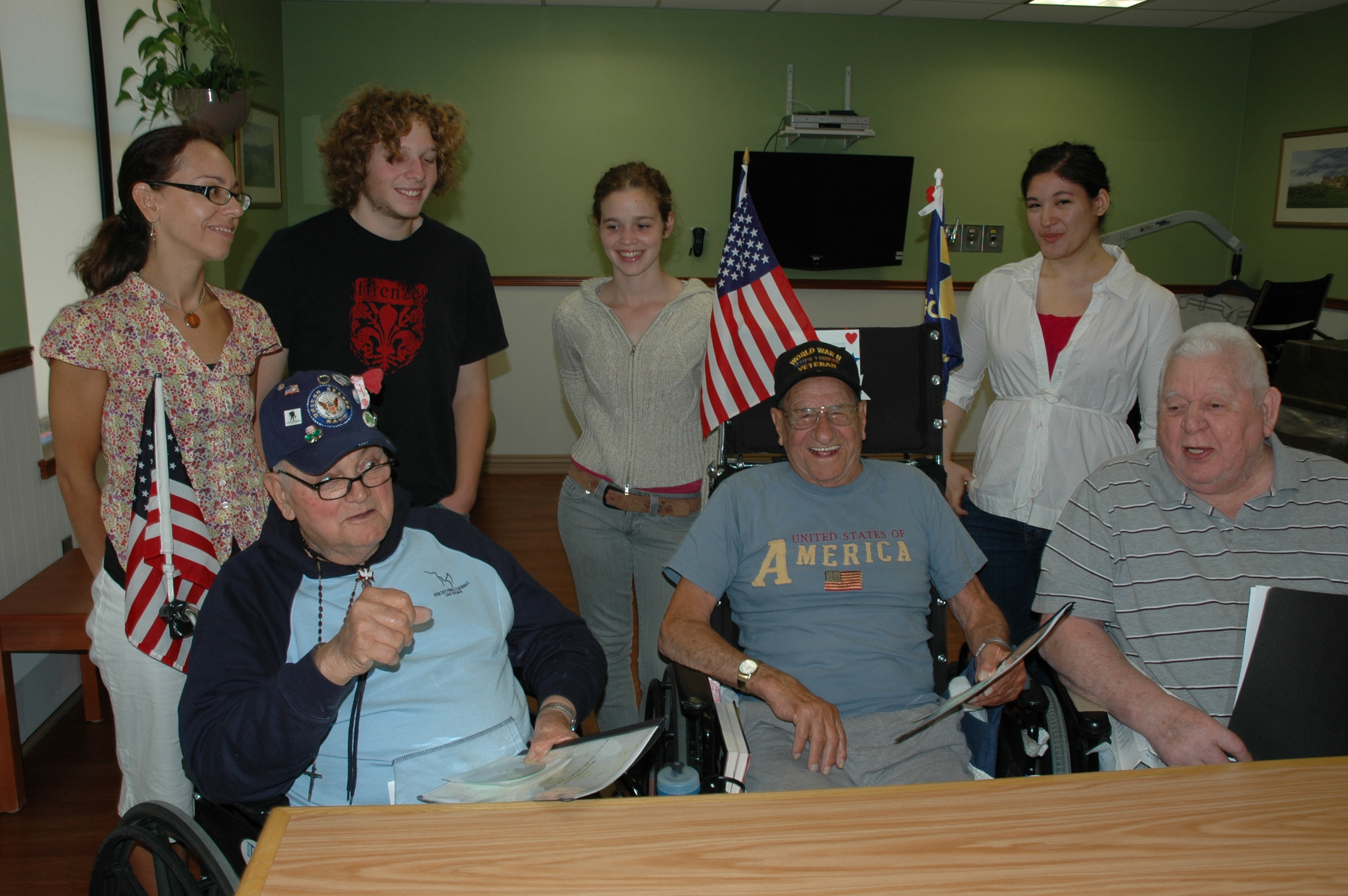 The students in Professor Kristina Lucenko’s Honors College memoir-writing class learned as much about themselves as they did about their subjects at the Long Island State Veterans Home (LISVH), located at Stony Brook University, after interviewing the residents recently.

On May 7, their last day of class, the students returned to the LISVH to read what they wrote to some of the residents, who gave them a round of applause and were visibly moved by the students’ words.

Student Ross Barkan wrote, “Running my eyes over the fluorescent, antiseptic hallways of the LISVH, I feared many of the same things [as Ken Kesey’s One Flew Over the Cuckoo’s Nest]: angry and broken people muttering madly, resenting me for invading their space, resenting me for my youth, my health . . . perhaps I wasn’t up to this task after all. As you all know by now I couldn’t have been more wrong.”

Barkan went on to name the veterans with whom he spoke, such as John Blankenship, who told him about the thrills he got from flying airplanes, up until just a few years ago, for 50 years, and Tom Deluca, who made the D-Day landing in Normandy and survived with shrapnel in his leg and knee.

Deluca also was eager to share memories from his idyllic childhood in Sicily, where he was raised on a farm and made his own wine and olive oil.

In another session, Barkan interviewed veterans Mike Geronimo and Al Napoli who, astonishingly, lived four doors apart from one another in the Bronx but never actually met until they moved into the LISVH.

Today these two finish each other’s sentences and are inseparable. Geronimo’s advice: “Don’t live in fear—don’t live in the corner. Savor every day, treasure your loved ones, and never stop laughing.”

Student Marcela Maxfield explained her initial reaction to learning that she would interview veterans. “My grandfather on my mother’s side passed away many years before I was born . . . my grandfather on my father’s side lost most of his memory by the time I was old enough to talk to him. My maternal grandmother is a shy woman whose first language is Spanish . . . in all honesty I had grown to view talking to my grandparents as a somewhat futile task that was more difficult than enjoyable.”

Instead Maxfield was surprised to discover an animated Napoli and Geronimo who spoke with enthusiasm about the Suffolk County Golden Games they compete in every year against other Suffolk County senior citizens.

Student Sarah Evins cited growing up as an only child and the youngest in her extended family as creating a “barrier” between her and her venerated relatives. Her fears were assuaged as soon as she entered the LISVH. “Most striking was the lightheartedness I saw among all of the residents,” she said. “To see these men who had lived on such a grand scale of life—fighting in and surviving a war, falling in love, leaving a legacy of children in their wake—act just as I would with my friends, I was struck with a sudden jolt of understanding.”

Perhaps Professor Lucenko best summarized what she and the students learned from the veterans. “As one student writes, ‘A memory can be a mirror . . .’ Through the stories told by the veterans, we learned that we are not as different as we first assumed. We learned that through listening to stories about the lives of others we can, as another student writes, see ‘true joy, an earnest love of living that seems rarer and rarer in our ironic, cynical age.’ ”