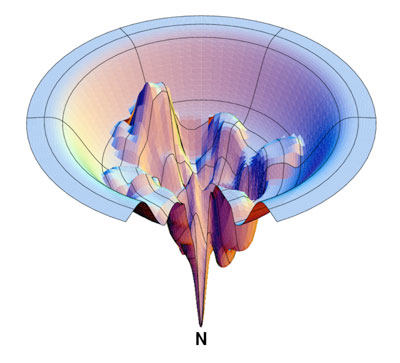 Ken A. Dill, Distinguished Professor of Biophysics and Pharmaceutical Chemistry, and Associate Dean of Research in the School of Pharmacy at the University of California, San Francisco, has been named Founding Director of The Louis and Beatrice Laufer Center for Physical and Quantitative Biology at Stony Brook University. The Center was established by a generous gift in 2008 from Dr. Henry Laufer, which was among the largest private donations for an academic program ever given to the University and will play a key role in achieving the University’s goals for innovation, scholarship, and interdisciplinary research in the 21st century.

Dill is a member of the National Academy of Sciences and a past president of the Biophysical Society. He is known internationally for his pioneering work on the physical forces that give rise to the structures and properties of protein molecules. Dill will also be a member of the Department of Physics and Astronomy and the Department of Chemistry. The Associate Director of the Center will be Stony Brook’s Carlos Simmerling, Professor of Chemistry, a renowned expert in computational chemistry and pioneer in physics-based computer modeling of proteins and DNA.

The new interdisciplinary Center will bring together experts in such fields as mathematics, genetics, biochemistry, engineering, and computer sciences to achieve breakthroughs in biomedical research and health care. In addition to establishing the Louis and Beatrice Laufer Center, the gift will fund three endowed faculty positions, including two endowed professorships and an endowed chair.

Research at the Center will focus on solving challenging problems at the interface between the physical and life sciences. As an example, a deeper knowledge of the physical bonding forces within molecules will help to improve the computer algorithms that are increasingly used to design next-generation pharmaceuticals and biotech drugs and to understand the mechanisms of action of proteins. And, a deeper understanding of the mathematical principles that govern the network interrelationships among the thousands of biochemical reactions and genetic control circuits inside cells will aid in developing next-generation approaches for curing diseases.

By 2012, the Laufer Center will be comprised of five core faculty members, additional affiliated faculty, junior fellows, postdoctoral fellows, and graduate students. A novel aspect of the Center’s research will be a core-team approach to problem solving and outreach. The Laufer Center also will sponsor an interdisciplinary graduate training program, directed by Stony Brook’s David Green, a computational biophysicist and Assistant Professor of Applied Mathematics and Statistics.

The Center will be located in the former Life Sciences Library when renovations are completed in the summer of 2011.