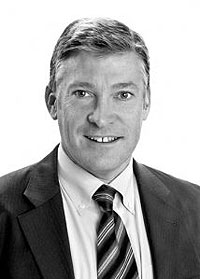 Corporations Are Not People: Responding to the Supreme Court in Citizens United

Jeff Clements is the co-founder of Free Speech for People, a national, non-partisan campaign to challenge the creation of Constitutional rights for corporations, overturn Citizens United v. FEC, and strengthen American democracy and republican self-government. He is the author of Corporations Are Not People (Berrett-Koehler, 2012).

Clements, an attorney, has represented people, businesses and the public interest since 1988 and served as Assistant Attorney General and Chief of the Public Protection and Advocacy Bureau in the Massachusetts Attorney General’s Office from early 2007 to 2009. As Bureau Chief, he led more than 100 attorneys and staff in the enforcement of environmental, healthcare, financial services, civil rights, antitrust and consumer protection laws. Clements also served as an Assistant Attorney General in Massachusetts from 1996 to 2000, where he worked on litigation against the tobacco industry and handled range of other investigations and litigation to enforce consumer protection and antitrust laws.

Abstract: Jeff Clements will discuss his new book, Corporations Are Not People: Why They Have More Rights Than You Do and What You Can Do About It, which shows how the largest corporations in the world organized and funded a three-decade effort to take over our American government and Constitution, culminating in the 2010 Supreme Court decision in Citizens United v. Federal Election Commission striking down a century of law restricting corporate spending in elections. Clements connects the recent fabrication of “corporate rights” under our Constitution to the disabling of republican democracy in America. Elections and government now are dominated and controlled by corporations and the extremely wealthy, with devastating results: lost jobs, stagnating wages, and vanishing benefits for most people and extraordinary riches for a very few; environmental destruction and accelerating global catastrophe; dead-end fossil fuel energy policies demanding unjust, unwise use of military force around the world; and a loss of faith in the American promise of government of, for and by the people. At the same time, Clements will discuss the rapidly growing movement for a Constitutional amendment to overturn Citizens United and corporate rights, the work of Free Speech for People in this effort, and the ways in which you can join the work of millions of Americans to build anew that rarest of things: a peaceful republic of free people with equal rights and an equal voice.

This Provost’s Lecture, co-sponsored by the Center for Study of Working Class Life, will be held on Thursday, June 7, at 7 pm in the Student Activities Center, Ballroom B.