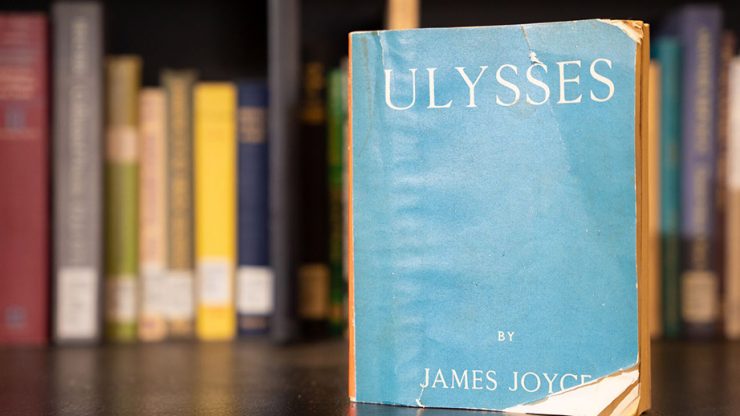 February 2, 2022, marked the 100th anniversary of the publication of James Joyce’s Ulysses, widely considered the most important novel of the 20th century. A special event presented by the College of Arts and Sciences Department of English will celebrate this milestone, complete with a showcase of an early edition of the novel owned by the department.

A roundtable discussion, “James Joyce’s Ulysses: The First 100 Years,” will be held on Wednesday, March 9, at 1 pm featuring Department of English faculty Elyse Graham, associate professor; Celia Marshik, professor; and Michael Rubenstein, associate professor, who will discuss the value of the novel to their scholarship and teaching.

“Even before it was published in 1922, James Joyce’s Ulysses had become an international litmus test for what literature could and should be,” said Marshik. “Readers, editors, government officials and journalists hotly debated whether it was a sign of innovation or of the decline of Western civilization, debates that continue to intrigue me a century later. Whether researching censorship or garments, I have continuously circled back to Ulysses, proving Joyce right in his claim that he’d ‘put in so many enigmas and puzzles that it will keep the professors busy for centuries . . . and that’s the only way of insuring one’s immortality.'”

“James Joyce’s Ulysses made me want to be a professor of literary fiction,” said Rubenstein. “It has taught me so many things, among them, that an ordinary person’s — that everyone’s — mental life over the course of a single ordinary day contains multitudes, veering from the epic to the mundane to the disgusting, from violence to gentleness and love to hate, coursing with needs and wants and fears and hopes, almost none of which ever reach the threshold of speech, action or even simple recognition. For me Ulysses is still, 100 years later, foremost among the works of literature that record what it feels like to think and live as a human being. I am learning from it still.”

You can attend “James Joyce’s Ulysses: The First 100 Years” in person in the Humanities Poetry Center, Room 2001, as well as virtually on Zoom.