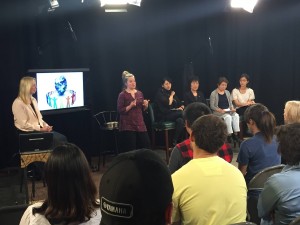 Students, faculty, staff and visitors packed the University’s Film Studio A on May 7 to attend a Hibakusha Stories presentation hosted by the Sustainability Studies Program at Stony Brook University.

The program, led by Hibakusha Stories Director Kathleen Sullivan, featured Japanese atomic bombing survivors (known as Hibakusha) Nobuko Sugino and Reiko Yamada, who gave their testimony on what it was like to live through the atomic bombing of Hiroshima on August 6, 1945. Also featured in the presentation was author and anti-nuclear activist Kristen Iversen, who discussed her investigation of, and experience living near and working at, the Rocky Flats Plant, a secret U.S. plutonium trigger factory located near Denver, Colorado.

“The Hibakusha come to you today not asking for you to feel sad for them, or for what they’ve been through,” said Sullivan. “Instead, they ask that you listen to their testimony and become inspired by their words to work toward a better future.”

While listening to the Hibakushas’ words, which were translated into English by two interpreters, the audience watched on, wide-eyed and open-jawed. Sugino and Yamada described their lives, marked by death, darkness and disease, as extremely challenging and, at times, even hopeless. Yet, the women also expressed that they felt it was their responsibility to warn others, particularly young people, of the dangers of nuclear weapons.

“The Hibakusha are getting older,” said Yamada, “and we may not be around to tell our stories for much longer. The next generations must learn about what we have experienced so that they can stop these weapons.”

Heidi Hutner, director of Stony Brook’s Sustainability Studies Program, agreed with Yamada. Hutner said that she felt it was important to bring Hibakusha Stories to the University and to film the group’s presentation so that the Hibakushas’ messages could be preserved “before they leave us forever.”

“There is an old adage: ‘We must never forget’,” said Hutner. “History tends to repeat itself when we do not remember and learn from the past. Hearing stories firsthand from survivors brings history alive and forces us to think in an up-close-and-personal way about nuclear weapons and war and whether this is something we want to engage in and support, or not.”

Iversen added to the conversation on nuclear weapons, discussing her experience “growing up in the nuclear shadow of Rocky Flats,” where nuclear waste stored in rusting metal barrels subsequently leached into the area’s soil and water table, a story she detailed in her book, Full Body Burden. Iversen showed a visual presentation that included contamination and cancer-cluster maps, and photos of deformed farm animals, which were presumably impacted by the presence of plutonium in their environment. Some members of the audience said that they were shocked to realize such a place existed, especially in the United States.

“I can’t believe I did not know about Rocky Flats,” said one student in the audience after hearing Iversen give her testimony.

Hutner said she felt it was important to incorporate the oral histories of the Japanese Hibakusha with Iversen’s story in the U.S.

“It’s all part of our world history,” said Hutner. “Japan and the U.S. have deep historical ties.”

According to Hibakusha Stories, there are an estimated 19,000 nuclear weapons still in existence on Earth, and nuclear proliferation has spread from five to nine countries in a matter of decades. Since 2008, the group has given hundreds of presentations and workshops all over the world, mostly to students. For their presentation at Stony Brook University, Sugino and Yamada had traveled to New York all the way from Japan.

“I’m honored they could make the journey,” said Hutner. “The speakers were elderly and traveled for thousands of miles to come to us. I am grateful to Kathleen Sullivan and all of her speakers.”

The filmed event will be available for viewing on the Sustainability Studies website, and on the SBComm YouTube channel. 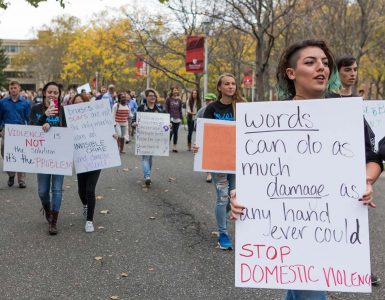 The SBU community is invited to show support for all those affected by relationship violence in any form by participating in the march at the SAC Plaza.