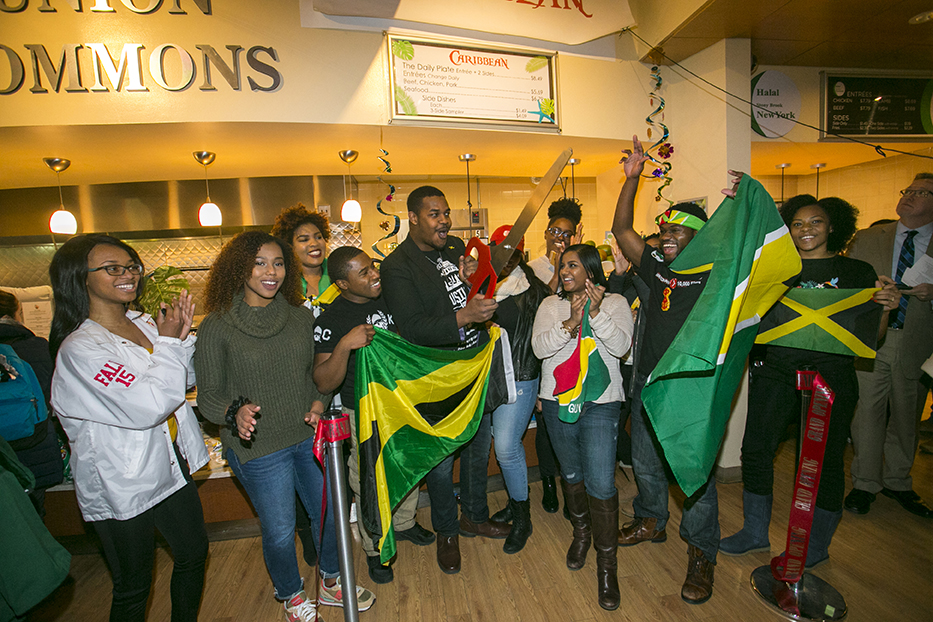 The atmosphere was festive at the grand opening of Island Soul, the new Caribbean and Southern food concept at Union Commons. Although the sounds of lively Caribbean music echoed at the Union, the students’ cheers were even louder when the name of the station, which was determined by student input, was finally revealed. Randy Ferguson ’16 and his fellow students from the Caribbean Student Association, Phi Delta Psi Fraternity Inc. and the Student African American Brotherhood unveiled the name and cut the ribbon, making Island Soul official.

“I am so proud of the students from the various cultural student groups who collaborated with Campus Dining, the Faculty Student Association (FSA) and the Office of Multicultural Affairs to develop the concept, recommend ethnic recipes and help judge the student contest,” said Cheryl Chambers, Associate Dean for Multicultural Affairs.

A Taste of Home
After last spring’s successful Caribbean Cook-off competition, students longed for a dedicated station where they could enjoy authentic homemade flavors from Caribbean and Southern cuisines. Last December, Campus Dining met with several student groups to discuss the development of a Caribbean and Southern food concept.

“Island Soul was a long time coming that was needed in Stony Brook. Especially for the Black community, we needed something that we can relate to when it comes to food,” stated Ferguson, President for Student African American Brotherhood Chapter of Stony Brook University. “Campus Dining was open to the idea of having the Caribbean spot in the Union. It happened and became successful, and it will be an important venue that will go down in the history of Stony Brook.”

Created by Students for Students
To ensure the spice and flavors of the station were as close to home as possible, the food offerings needed to be not only tasty, but also authentic and affordable, so the students collaborated with Campus Dining to select the type of dishes that should be included. They even suggested restaurants in the NYC metro area where Campus Dining could research the flavors they were looking for.

With this information, Campus Dining created a menu that includes different favorite dishes from the Caribbean and Southern cuisines. Ferguson’s Caribbean Cook-off winning recipe, Jerk Chicken and Rasta Pasta, is also one of the dishes featured in Island Soul.

On Monday, Wednesday and Friday, Caribbean cuisine is featured with favorites such as:

Continuous Feedback
“We are excited about this new offering especially because it was based on student feedback and we worked hand in hand with the students,” said Gretchen Favors, General Manager at the Union Commons. “As we continue to bring student suggestions to campus dining, we encourage them to reach out to us either in person or by submitting a comment on the website or texting TellSBUEats comments to 82257.”

“The creation of Island Soul was a great collaborative process between students and the University that we are definitely looking to replicate in the near future, which began with a cooking competition last spring,” said Tim Ecklund, Dean of Students. Campus Dining is collaborating with other student groups to plan another cooking competition this spring semester. “We’ll be announcing more details in the upcoming weeks,” said Ecklund.