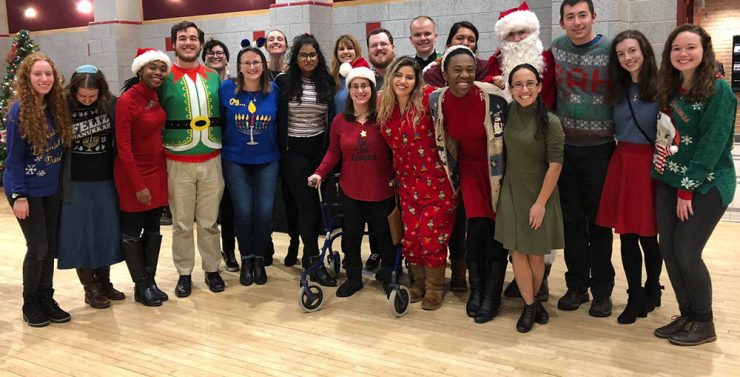 The fifth floor of the Melville Library is home to a diverse family of worshippers.

On any given day, it’s not uncommon to hear the Islamic call to prayer chanted as the smell of incense from a Catholic Mass fills the air. Down the hall, Jewish students laugh and joke together in Hebrew.

You’ll also see students and religious leaders from many faiths stopping to chat, make plans, or ask questions. Here, there’s none of the tension that sometimes exists between people of different cultural or religious backgrounds. And that’s exactly what Rabbi Joseph Topek has spent nearly 40 years fostering at Stony Brook’s Interfaith Center (IFC).

The IFC was founded in 1975 to assist religious leaders and chaplains in meeting the spiritual needs of the campus community.

At that time, only Catholic, Protestant and Jewish organizations were represented. It has since grown to include Muslim and Asian Christian groups with the goal of expanding to other faiths in the future.

“Some groups focus primarily on religious worship services and things like Bible study. Some of our groups also have active music ministries, regular spiritual retreats and significant community service programs,” said Topek, chairperson of the center and chaplain of the Hillel Foundation for Jewish Life at Stony Brook. “The IFC promotes diversity, understanding, cooperation, and mutual respect, all important elements in making Stony Brook a community of excellence and a good place to be a student.”

And as the fall semester draws to a close, the Interfaith Center hosts two gatherings for the University community to reflect while celebrating the diverse cultural backgrounds represented on campus.

This year’s Interfaith Thanksgiving Dinner again included all of the traditional staples of an American Thanksgiving feast, along with student performances and readings on gratitude. This month, the Festival of Lights marks an array of winter celebrations including Christmas and Three Kings Day, Hanukkah, Kwanzaa, Eid al-Fitr, Diwali and the Winter Solstice. Attendees can sample traditional holiday foods and sweets, make crafts and enjoy musical selections from students.

Sister Sanaa Nadim, chaplain of the Islamic Society at Stony Brook, noted that the Interfaith Center is about more than just celebration. The chaplains also lead the campus in uniting during times of tragedy. Most recently, they held an outdoor vigil following a synagogue shooting that killed 11 people in October. Chaplains from many faiths offered prayers as students linked arms and comforted one another.

“We have seen each other through the best times, and through wars and tragedies,” said Nadim, who founded the Islamic Society here 27 years ago. “We want to spread amicable solidarity throughout the campus. When people see the religious leaders on campus are united, there becomes a natural desire to come together.”

Father Lachlan Cameron of Catholic Campus Ministry is the newest chaplain of the group, arriving at Stony Brook in August. While he’s still getting to know his students and fellow chaplains, he’s looking forward to supporting the Interfaith Center however he can.

“I think the enthusiasm of the students is one of the greatest joys of this position so far…in campus ministry, you’re working with a population who is interested in learning more about their faith while encouraging others around them to do the same, and it’s very exciting,” Cameron said. “In a society where spirituality tends to be diminishing, conversation among all religious groups is valuable for understanding one another, and while we may not worship together, we share a belief in the dignity of each person and the common good.”

Nadim agreed, saying that working with young people is the fulfillment of her life’s calling.

“God works in mysterious ways, and I really believe Stony Brook to be one of the most wonderful and welcoming campuses. We owe so much to the administration for supporting the Interfaith Center, allowing us to grow and diversify,” she said. “In a world where people find what makes them different and build wars on it, we need to affirm to people that we are all children of the same God.”