How to Successfully Age: A Conversation with AARP President Jeannine English 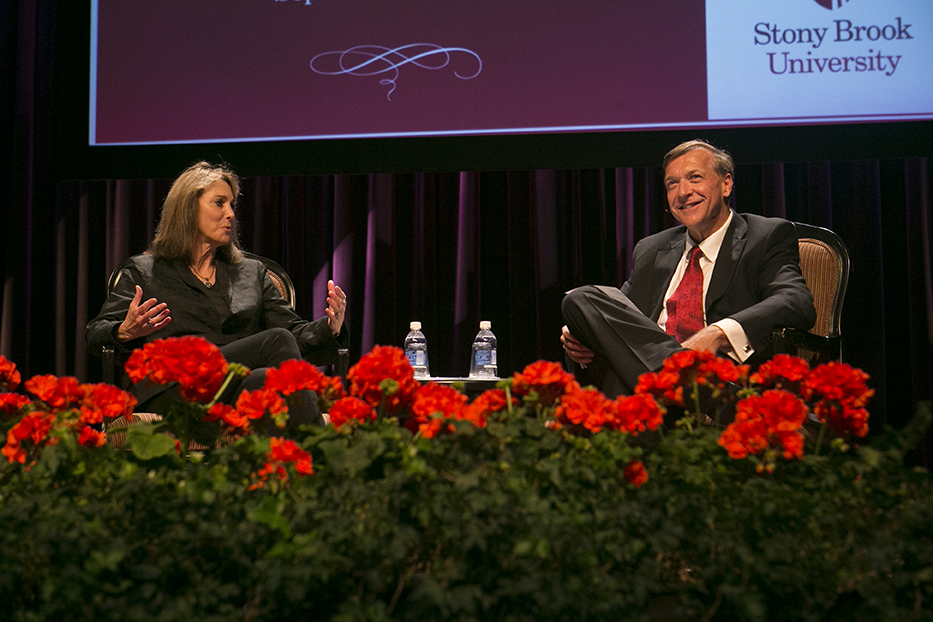 AARP President Jeannine English was on campus September 30 to introduce some new ways of thinking about aging and living in her talk, “Forget the Stereotypes: It’s a New World for Aging” at the Charles B. Wang Center Theatre. Faculty, staff and students attended the discussion along with community members and elected officials New York State Assemblyman Steve Englebright, New York State Assemblyman Michael Fitzpatrick and Brookhaven Town Councilwoman Valerie Cartright.

“The issues of how to successfully age — as individuals, as communities and as a nation — are among the most important ones that we face,” said Stony Brook University President Samuel L. Stanley Jr., MD, in his introductory comments. “They impact our personal well being, the needs of our towns and cities, and the fiscal health of our country.”

America has more people approaching old age than ever before in our history. According to the U.S. Department of Health and Human Services, by mid-century there will be almost 100 million Americans age 65 or older, more than twice as many as in 2013. In the U.S., 10,000 people turn 65 each day, and one in four will live beyond 90. It’s a fact: most people are surviving to old age.

How successfully we age in later life has a lot to do with how we take care of ourselves throughout life, which makes it important to talk about these issues early in adulthood and beyond. President Stanley noted how relevant it is to have such a discussion at Stony Brook, which is helping to lead the world in the exploration of some important issues connected to successful aging, such as the latest breakthroughs in healthcare, new frontiers in energy, new understandings of our environment, and new uses of technology. The University also has leading experts in a wide range of fields relevant to aging, from medicine, nursing, dentistry and health technology to business and engineering, the social sciences and social welfare.

As the leading nonprofit organization in the country that deals with issues of aging, AARP focuses on healthcare, employment, income security and retirement planning — concerns for most adults. The organization has nearly 38 million members, and more than 2.5 million of those members live in New York. As AARP’s leader, Ms. English demonstrates successful aging — she climbed Mount Kilimanjaro when she was 50 — and is at the forefront of many important priorities facing our nation.

She stressed the importance of a world in which generations support each other. Young people have the skills and know-how to help their elders, and in turn, older people have the experience and knowledge to help our communities and our economy. “We all have a shared interest in living productive lives, lives of meaning and dignity. The potential for intergenerational cooperation is fantastic, and it can be a real opportunity for our society in the years to come.”

Ms. English feels that one of the great strengths of our society is the support that flows in both directions, between the young and the old. “I think that going forward, one of the ways that we can make the world better is to promote even more cooperation between generations. Family members support each other for the long haul, and we are better off for it.”

She pointed out the importance of family caregiving, with 40 million Americans providing unpaid care for their loved ones. That amounts to $470 billion a year, which is more than the entire federal Medicaid budget, and is the backbone of long-term care in this country. AARP encourages intergenerational cooperation of all kinds — whether that means mentors in the workplace, volunteer teachers, young people visiting lonely seniors or teaching them about technology and social media. At any age people want opportunities to learn, grow and stay engaged in the community and world around them.

Since its inception in 1958, AARP has been about improving the conditions for older Americans and their families. What some refer to as the “longevity bonus,” according to Ms. English, means that people will have more time to change careers and start new ones, more time to discover passions, more time to contribute and learn new things. She also mentioned that at AARP, their major goal is to “disrupt aging,” to look at aging in a new way and see all of the possibilities, no matter how old you are. They concentrate on three areas: health (security), wealth (financial resilience) and self (personal fulfillment).

AARP also is a big supporter of what she referred to as “livable communities,” places that support residents of all ages with services they need, such as housing, healthcare, transportation, shopping, safety, clean environments, recreation. It is the vision that everything is interconnected and mutually enforcing.

Following Ms. English’s talk, President Stanley joined her on stage for a question-and-answer session that touched on some of the topics she discussed, such as access to Social Security, the goals of providing livable communities and disrupting aging, and the need to support caregivers in our communities. She believes that Social Security benefits are absolutely crucial and a top priority for AARP because they keep people out of poverty. She promised that AARP will fight to keep the 80-year-old Social Security program for future generations.

“Aging is happening all around us,” Ms. English concluded, “we all have a growing chance to live interesting, rewarding lives for a long, long time.”

About Jeannine English
Ms. English, CPA, MBA, has been a member of the AARP board of directors since 2010 and a national officer of AARP since 2012. Previously, she chaired the AARP National Policy Council and served as president of AARP California. She was a founding partner of a government relations and legislative advocacy firm in California where she represented a broad spectrum of clients, including AARP. Prior to that, Ms. English served as the executive director for the bipartisan Commission on California State Government Organization and Economy. In addition, she was the campaign committee president for the successful California Citizens Redistricting Commission Initiative and co-chair of the California Open Primary Initiative. 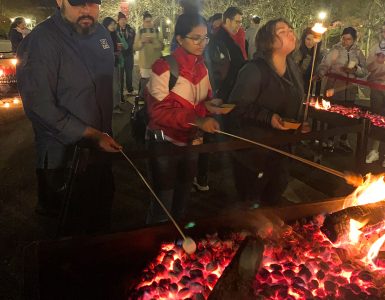