Honoring Our Veterans in the Annual Veterans Day Ceremony 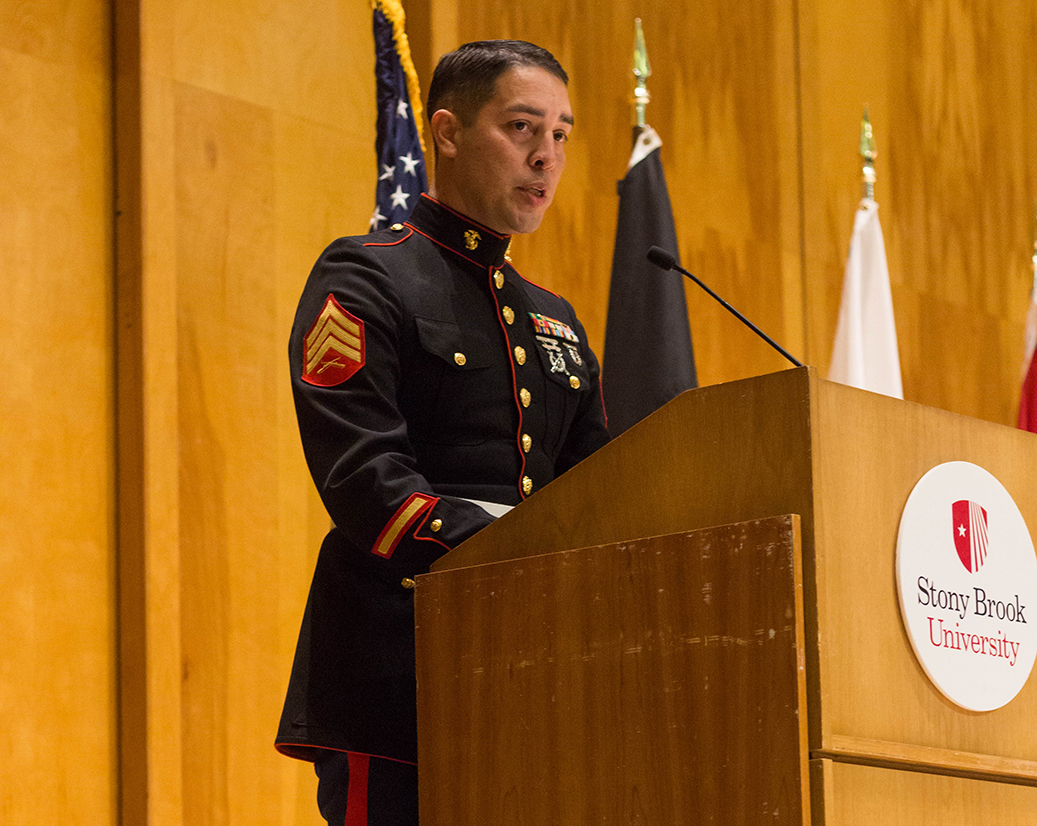 The courageous men and women of the United States Armed Forces were honored on Wednesday, November 8, 2017, at Stony Brook University’s annual Veterans Day Ceremony. The event in the Students Activities Center was attended by approximately 165 members of the campus community, roughly 80 were veterans of foreign wars ranging from Afghanistan and Iraq vets, all the way back to World War II.

The Spirit of Stony Brook Marching Band began the ceremony with a medley of the various marching songs for each branch of the military. Osbert Orduña, who honorably served the United States Marine Corps during Operation Iraqi Freedom, was this year’s keynote speaker.

“Honor, courage and commitment. These three words I became quickly introduced to when I joined the Marines,” said Orduña, who is the CEO and co-founder of M&C Venture Group, LLC, which specializes in providing construction, disaster response and facilities services to all levels of government. “You did not have to serve in the military to have these values, but for those of us who have always remember honor, courage and commitment is how we veterans live our lives.”

Christopher Joseph, Vice President of the Veteran Student Organization and Student Assistant for the Office of Veteran Affairs, served as the master of ceremonies and shared his own experience as the son of a United States Air Force veteran.

“This day marks a momentous opportunity to not only to give back to those who have fought for my liberty and freedom, but also those who continue to guard our safety here at home,” said Joseph, a Health Sciences major at Stony Brook University. “Our veterans were and still are the epitome of valor through their unwavering dedication to securing America’s freedom while putting their lives on the line and sacrificing in a way unbeknownst to us. It is important to acknowledge the losses our veterans have endured and the changes they have suffered.”

United States Army veteran, Office of Veterans Affairs Student Assistant and Biology major Marquis Cunningham’s experiences through the Armed Forces helped provide real life preparation for his intended career in the medical field. “During my time I performed sick call operations, provided medical supervision at training events, and patched up soldiers on the weekends,” said Cunningham, who served as a medic at Ford Drum for the 1-87 Battalion, and eventually rose to senior medic for a light infantry company. “It was during this time that I realized I could potentially do this long term. From this experience I realized I really enjoyed the stress and quick thinking that comes with being under pressure, and I knew that I could do this for a career.”

“I’m really grateful for the privilege to be participating in this event, and on behalf of President Stanley, I would like to thank each and every one of you for being here today, said Dr. Matthew Whelan, Vice President for Strategic Initiatives and Interim Vice President for Student Affairs. “As we honor our veterans today it’s so important that we, as a community, continue to do so every day to honor their sacrifices and help improve services for our men and women in uniform.”

Highlighted by Dr. Whelan were just some of the many contributions and services provided by the University. As many veterans have postponed their education to serve in times of need, the Office of Veterans Affairs is undertaking several efforts to increase services and help better prepare veterans as they transition into the Stony Brook community. In addition, the contributions of the Veteran Student Organization include assisting in the planning of campus live events, academic advising, discussing pertinent points of interest, and enhancing the overall growth and success of our veteran students. As the reconstruction of the Student Union is presently underway, space has already been allocated for a dedicated office for veterans services.

“The ceremony was such a beautiful experience, not only to me but also to my fellow peers seated with me. I was moved emotionally within minutes of being there,” said Alexandra Spinelli ‘20, who is a Red Watch Band Greek Leader and a Stony Brook CHILL Peer Educator. “The speakers were great, and I didn’t need to have military experience to understand their strengths and the sacrifices each of them made. I think my favorite part of the entire event was seeing the older Navy veterans with their families and aides smiling when they spoke to myself and the other peer educators.”