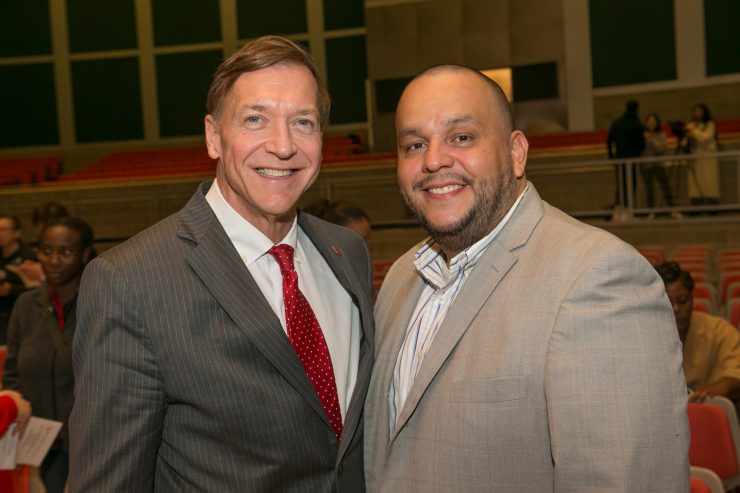 The proud flags of Hispanic countries waved in the wind and the marching band’s pounding drums marked the start of this year’s Hispanic Heritage Month.

Hispanic students carrying the flags marched into the Sidney Gelber Auditorium in the Student Activities Center, eagerly awaiting two speeches on the theme of “Justice For All.” President Samuel L. Stanley delivered the first speech, noting the importance of the Hispanic community to the campus.

“Given today’s political environment, it is more vital than ever that we unite to honor the contributions of those who have enriched American life and worked to rectify inequality and injustice in our society,” President Stanley said. “At Stony Brook, our diversity has always been one of our strongest assets, and the Hispanic American community is an essential component of our multicultural campus.”

Keynote speaker Sergio Argueta, Turner Fellow Alumnus and Founder and Board Chair of S.T.R.O.N.G. (Struggling To Reunite Our New Generation) Youth Inc., one of the leading gang prevention and intervention agencies in the northeastern United States, expanded further on President Stanley’s comments. He discussed the personal connection he had with Hispanic stereotypes, and the need for members of the Hispanic community to speak up and take action.

“My story does not begin on the day I was born,” Argueta said. “It predates that.”

He also spoke to the theme of “Justice For All” and the controversy surrounding the phrase.

“As we think about the words ‘justice for all,’ there’s a reality that most all of us know,” Argueta said. “Justice doesn’t exist for all.”

This event will include performances from the Stony Brook Marching Band along with a Presentation of Colors from the ROTC Culper Battalion.