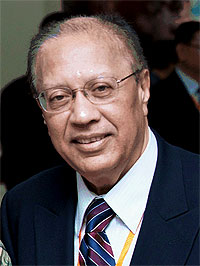 Ambassador Anwarul K. Chowdhury has devoted many years as an inspirational champion for sustainable peace and development and ardently advancing the cause of the global movement of the culture of peace. He served from 2002 to 2007 as the Under-Secretary-General and High Representative of the United Nations, responsible for the most vulnerable countries of the world. A career diplomat, he served as Ambassador and Permanent Representative of Bangladesh to the United Nations in New York from 1996 to 2001. He also served as President of the Security Council, President of the United Nations Children’s Fund (UNICEF) Executive Board and Vice-President of the Economic and Social Council of the UN for two terms.

Ambassador Chowdhury spearheaded a pioneering initiative of the United Nations General Assembly in 1999 for adoption of the landmark Declaration and Programme of Action on a Culture of Peace and proclamation of the “International Decade for Culture of Peace and Nonviolence for the Children of the World (2001-2010).” His initiative in March 2000 as the President of the Security Council led to the adoption of the groundbreaking UN Security Council Resolution 1325 on Women and Peace & Security.

He is the chair of the International Drafting Committee on the Human Right to Peace, an initiative based in Barcelona, Spain and Vice-Chair of the International Congress on the Human Right to Peace held in December 2010 at Santiago de Compostela, Spain. He is the recipient of the U Thant Peace Award, UNESCO Gandhi Gold Medal for Culture of Peace and Spirit of the UN Award. In March 2003, the Soka University of Tokyo, Japan conferred to Ambassador Chowdhury an Honorary Doctorate for his work on women’s issues, child rights, and culture of peace as well as for the strengthening of the United Nations. He is the Chair of the International Day of Peace NGO Committee at the UN, New York, and Chairman of the Global Forum on Human Settlements, both since 2008.

This Provost’s Lecture will be held on Thursday, February 16, at 4 pm in the Charles B. Wang Center Theater.

Purchase your tickets now for the Seawolves return to LaValle Stadium on Saturday, Sept. 25, when they host Fordham at 3:30 pm.