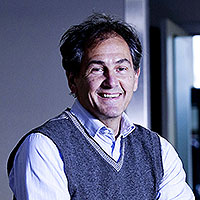 The Evolution of Languages: An Evolutionary Biologist’s Perspective

Mark Pagel, professor of evolutionary biology at Reading University, UK, and Fellow of the Royal Society, is one of the world’s most distinguished evolutionary biologists. He has contributed significantly to our understanding of how to construct evolutionary trees and has applied these accomplishments to understanding the evolution of our written language. His book Wired for Culture: Origins of the Human Social Mind (WW Norton) was named one of the best science books of 2012 by The Guardian.

Abstract: Human beings speak approximately 7,000 mutually unintelligible languages around the world, giving our species the curious distinction that most of us cannot understand what most other people are saying. This talk will explore the origins of our unique language capability, ask whether any other species could speak, and highlight the remarkable features of language that allow it to evolve and adapt much like genes do, meaning we can trace its evolution back thousands of years into our past.

This Provost’s Lecture, co-sponsored by the Department of Ecology and Evolution, Department of Linguistics and Department of Anthropology, will be held on Friday, February 13, at 7:30 pm in Earth and Space Sciences 001.