Explore the Human Mind at the April 16 Mind Brain Lecture 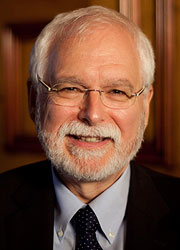 John P. Donoghue is the guest speaker at the 16th Annual Swartz Foundation Mind Brain Lecture, which will be held at the Staller Center on Monday, April 16, at 4:30 pm. A reception will follow the lecture in the Staller Art Gallery. The lecture is free and intended for a general audience.

Donoghue is the Henry Merritt Wriston Professor of Neuroscience and Engineering, and director of the Institute for Brain Science, at Brown University. He is also a senior research scientist with the U.S. Department of Veterans Affairs.

In his lecture, “The Human Neural Interface: Restoring Function by Merging Brain and Technology,” Donoghue will discuss his research on how the cerebral cortex computes commands for voluntary movements. His laboratory is translating advances from this fundamental research into a human neural interface system called BrainGate™, which is designed to restore useful functions for people with paralysis. BrainGate physically reconnects the brain to the outside world through a tiny sensor that is implanted into the motor cortex. In the BrainGate pilot clinical trial, persons with long-standing paralysis have used their own neural signals to operate external assistive devices, including computers and robotic limbs.