Entrepreneur Titans Peer Into the Future of News and Communication 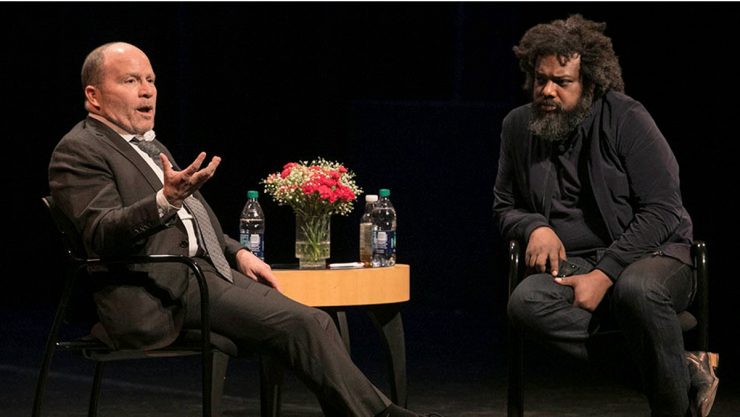 One guest is a “serial entrepreneur” with a background and pedigree in traditional journalism; the other is an award-winning marketing guru who has spearheaded some of the industry’s largest global marketing campaigns across digital, mobile, television, print, and experiential platforms. That includes some of the first marketing campaigns to leverage Facebook, Twitter and YouTube.

On February 13, the Stony Brook School of Journalism and College of Business brought the two startup giants together in the Charles B. Wang Center Theatre for a remarkable look at the future of journalism and communication.

Despite their disparate communication backgrounds, there’s one thing they readily agreed on: there’s a new model in journalism.

“Today messaging is somewhere between a digital ad and an email,” said Michael Loeb, the above-mentioned “serial entrepreneur” and CEO of venture investment company Loeb Enterprises. “Nobody opens email anymore, but everyone reads texts.”

Added digital guru Bonin Bough: “If you understand search engine optimization (SEO), you’ll never be wanting for a job. The new job is an amalgam of ‘what is great writing’ and ‘what is important.’ And science is part of the equation now.”

You might say that journalism is embedded in Loeb’s genes. His father Marshall Loeb was an influential editor, columnist and TV commentator, and is widely recognized as the father of modern business journalism.

“Editorial and business used to be church and state and never the ‘twain shall meet,” said Loeb. “Now it’s a romantic notion but back then it was very deliberately done.”

After cutting his teeth at Time Inc., where his dad worked, and then spending an ill-fated stint at a startup magazine called Entertainment Weekly, Loeb went out on his own, launching a company called Synapse. That company would go on to become the largest subscription magazine firm in the world in just a few short years.

Loeb sold Synapse to Time in 2006 and founded Loeb Enterprises, a self-funded ideas-to-execution ‘start-up factory’ now building over a dozen companies in New York and other regions around the country. But even though his second career has taken him away from traditional journalism, that discipline is still very much in his blood.

“Journalism has fundamentally changed,” Loeb emphatically told the audience. “Back when my dad was at Time, journalists had a monopoly on news. Fact checkers would check every single word, every single quote. Journalism has utterly changed.  It used to be imperious, but it’s totally been democratized. There was no false news. Now anything goes.”

Loeb used an example of modern politics to illustrate his point.

“If you look at the way people vote, it used to overlap,” he said. “Now it’s completely polarized. It used to be statesmanship, now it’s ‘win or lose.’ The first debate between Donald Trump and Hillary Clinton was noted for its anger. I went back and looked at an old debate between Ronald Reagan and Walter Mondale and it was subdued, polite, respectful. We’ve lost that and now it’s a free-for-all. The only thing that gets heard is the fringe stuff.”

How it happens is especially troubling; “Policy by tweet defies everything we thought about being thoughtful,” said Loeb.

While Loeb’s journalism background might be considered “classic,” Bough is very much a graduate of communications’ “new school.” As one of the youngest C-suite executives at a Fortune 50 Company, he worked for billion-dollar consumer brand companies including Mondelez and PepsiCo before starting Bonin Ventures – a growth accelerator that helps businesses of all shapes and sizes achieve revenue growth faster than they ever believed possible. He also hosts CNBC’s Cleveland Hustles, and is the author of Txt Me (646) 759-1837, a book that explores the impact and future implications of mobile devices and digital communication on individuals, companies and society.

“I was in a meeting with a major U.S. newspaper when some breaking news from President Obama came out and the newsroom just emptied,” recalled Bough. “They got a text and that was it. I thought that if I could do that with a brand, that would be a powerful thing. It became my model for real-time communication.”

As journalism moves further into the 21st century, new skills will be required for those that want to be communicators. Loeb and Bonin agree that the next valuable “skill” will be the balance between speed and quality.

“The filter used to be the publisher and editors,” said Loeb. “Now you are the only filter. The question becomes: How do you educate people about what is real and what is fake?’ How do you become your own editor and critic?”

“You’ll have to write fast and well, and be accurate,” said Bough. “So much of journalism and communication has shifted to the “right now.” As for today’s social media giants, Loeb describes what Facebook and Google have done to publishing as a “travesty.”

“Traditional agencies can’t compete with the speed that’s required today,” he said. “We’re going right from contact to commerce. Yet, having said that, it would be hard to make a case that the world isn’t better off for Google. This is the new reality and it’s not going back.”

To honor Marshall Loeb’s legacy, Michael Loeb and his sister Margaret announced in October 2018 that they would fund the Marshall R. Loeb Visiting Professorship in Digital News and Audience Engagement at the  Stony Brook University School of Journalism. The Loeb Professorship will be awarded to an outstanding journalist and will engage students and faculty in the practice and power of digital journalism.

“I’m impressed by a couple of things about Stony Brook,” said Loeb. “Stony Brook is the only university with an accredited journalism school. Also, upward mobility is very important. Both those things would have really resonated with my dad. He would have really appreciated this place.” 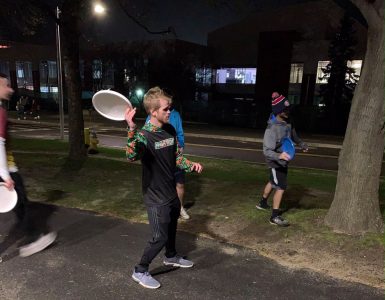 If you see a frisbee disc flying around campus late at night, it’s probably Panic Ultimate, Stony Brook University’s official Ultimate Frisbee team, playing a version of disc golf, or “frolf” as they call it... 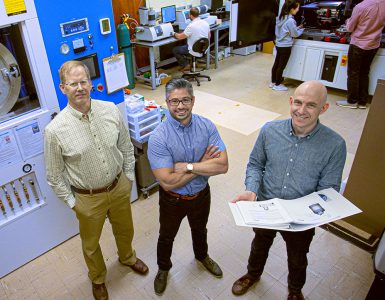 $2.35 million from the U.S. Department of Energy Advanced Research Projects Agency-Energy (ARPA-E) program has been awarded to the team in the Engineered Microstructures and Radiation Effects Laboratory (EMREL), led... 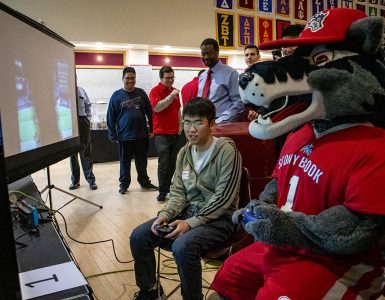 Beyond the Expected Podcast: The Coronavirus Effect: Cross-Campus Response

Disney Virtual Roth Pond Regatta Will Be Held May 8