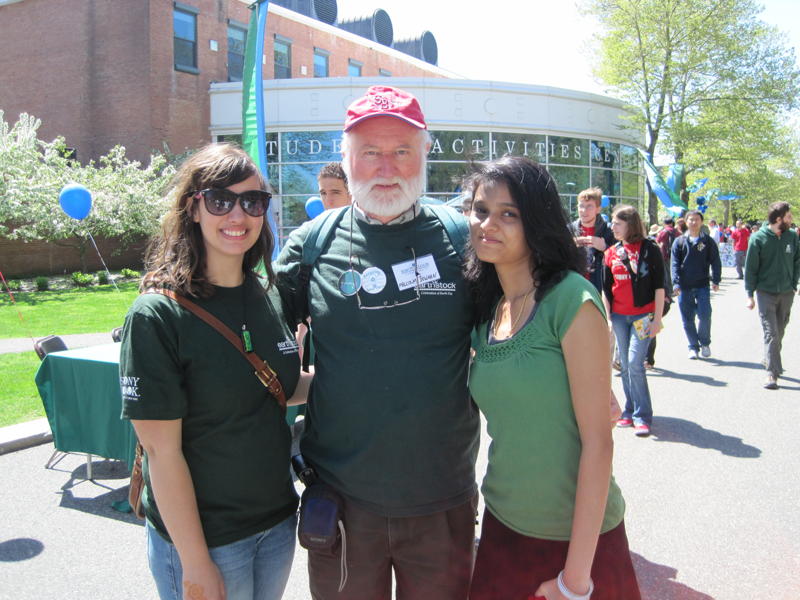 The 40th anniversary of Earth Day was celebrated last week with Earthstock 2010, five days of lively, informative academic and cultural events on the Stony Brook main campus. The week began on Monday, April 19, with a lecture by Carl Safina, president of the Blue Ocean Institute and an adjunct professor in the School of Marine and Atmospheric Sciences (SoMAS), on “History and Destiny in the World Ocean.” Safina also delivered one of two Earthstock Provost’s Lectures on April 21, “In the Same Net: Ocean Life, Ethics, and the Human Spirit.”

The other Provost’s Lecture was delivered by Asha-Rose Migiro, deputy secretary-general of the United Nations, who spoke on the “Roles of Women and the Environment in Developing Countries.” After her speech, a panel of four discussed her comments and gave their own perspectives: Bhaswati Bhattacharya, clinical assistant professor of family medicine at Weill Medical College of Cornell University and director of the Dinacharya Institute in New York; Floris Cash, chair of the Department of Africana Studies; Sunita Mukhi, director of the Charles B. Wang Center; and Patricia Wright, professor of anthropology and executive director of the Institute for the Conservation of Tropical Environments at Stony Brook.

Another highlight of the week was “The Great Debate: Be It Resolved–Humans Can Control Catastrophic Climate Change.” Malcolm Bowman, academic co-chair of Earthstock, professor of oceanography and distinguished service professor in SoMAS, and Safina argued for the “Government” in favor of the premise, and Lee Koppelman, leading professor in the Department of Political Science, and Howard Schneider, dean of the School of Journalism, argued for the “Opposition.” Jim Klurfeld, visiting professor at the School of Journalism, was the moderator. The “Government” won the debate, as determined by the audience. 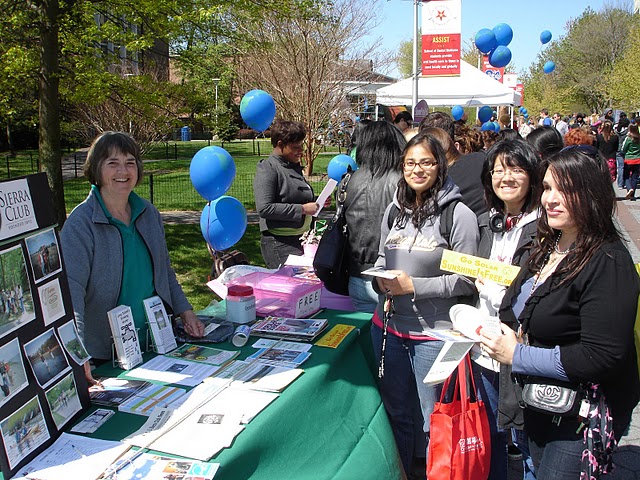 Earthstock Festival
Friday, April 23, dawned warm and sunny for the culminating festival. At opening ceremonies, after a appearance by Wolfie and the Spirit of Stony Brook marching band, Bowman welcomed all to the 10th annual Earthstock and introduced Vivian Viloria-Fisher, Suffolk County legislator; the student co-chair, Rezwana Zafar; the student vice co-chair, Elizabeth Lugten; and the administrative co-chair and assistant dean of students, Jeffrey Barnett. Students, faculty, staff, and community members strolled the Academic Mall, visiting exhibits by local high schools, campus clubs, academic departments, and environmental organizations. New this year was a farmers’ market, which proved very popular with the crowd, and an array of solar panels that powered electric vehicles, such as electric motorcycles, and some booths. Some Earthstock traditions continued: music was provided by Peat Moss and the Fertilizers, Pride Patrol cleaned up the flowerbeds, red rubber ducks raced down the “brook,” and free ice cream was snatched up by those with a sweet tooth.

Later in the evening, a Green Drinks networking event was held in the University Café, and in the Wang Center, attendees could view the URECA Earthstock Environmental Exhibition of Student Research before the Provost’s lecture. Afterwards, people relaxed to the sounds of Jack’s Waterfall back in the Café.

Other events during the week included an off-site program on the benefits of organic agriculture; programs on green industry trends and green bag design, an environmental poetry performance about the water crisis; and Do It in the Dark, a solar-powered rock concert.