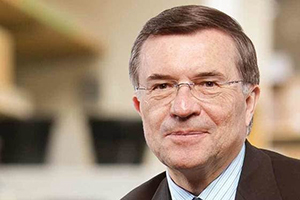 As part of the Engineering-driven Medicine Distinguished Lecture Series, the College of Engineering and Applied Sciences and School of Medicine will host Professor Terrence Sejnowski, Head of the Computational Neurobiology Laboratory at The Salk Institute for Biological Studies, which explores new understandings in neuroscience, genetics, immunology, plant biology and more. Professor Sejnowski, whose research in neural networks and computational neuroscience has been pioneering, will present “The Deep Learning Revolution” on Monday, May 7, at 11:30 am in the Charles B. Wang Center Theater.

Sejnowski’s work is focused on using computer modeling techniques to try to encapsulate what we know about the brain as well as to test hypotheses on how brain cells process, sort and store information. While other scientists have focused on mapping the physical arrangement of neurons, Sejnowski is interested in a more functional map of the brain, one that looks at how sets of cells are involved in processes — from filtering what we see to recalling memories.

This is an extraordinary opportunity to hear from an outstanding scholar and gain a greater understanding of the ever-evolving connections between engineering and medicine.