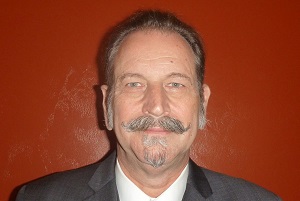 The Rohlf Medal for Excellence in Morphometric Methods and Applications will be presented to Dennis E. Slice on Tuesday, October 24, 2017 at the Provost’s Lecture Series, Charles B. Wang Center, Lecture Hall 1, 4 pm.

In his presentation, “An Unexpected Journey: A Curious Career in Shape Analysis,” Dr. Slice will discuss the developments in shape analysis during his graduate career, the people who influenced him, and his post-graduate work in software and methodological developments and applications.

Created in honor of F. James Rohlf, PhD, Distinguished Professor Emeritus of the Stony Brook University College of Arts and Sciences Department of Ecology and Evolution, the Rohlf Medal is presented every two years to distinguished members of the morphometrics community for their outstanding work on the development of new morphometric methods, or for their applications in the biomedical sciences.

This is the first year the award will be presented to a Stony Brook alumnus. Dr. Slice received his PhD in Ecology and Evolution from Stony Brook in 1993 under the supervision of Dr. Rohlf. While at Stony Brook, Drs. Slice and Rohlf worked together on two papers published in Systematic Biology and Italian Journal of Zoology, respectively.

“I discovered an interest in statistics after taking the biometry class from the late Dr. Robert Sokal, Distinguished Professor Emeritus of Ecology and Evolution,” said Dr. Slice. “I then took the multivariate class from Dr. Rohlf, and at some point, Dr. Rohlf had funding for a morphometrics research assistant. I jumped at the chance since I have always been interested in science, math, and art/graphics. Morphometrics affords the opportunity to work in all three areas.”

Currently a professor in the Department of Scientific Computing at Florida State University and Honorarprofessor at the University of Vienna, Dr. Slice’s work focuses on the development of theoretical and methodological issues in shape analysis and morphometrics and on their application to real-world problems, such as the development of tools for forensic science.

“The importance of morphometrics in today’s society can be best addressed through the applications,” said Dr. Slice. “New methods of shape analysis can help in forensic investigations, but can also be used to assess the fit and function of protective equipment such as respirators and protective head gear. It also provides tools that facilitate biomedical (e.g., injury biomechanics), ecological, and evolutionary studies.”

Dr. Slice was recommended for the Rohlf Medal by several peers who recognized him as an outstanding research scholar and educator with a remarkable record of pioneering research in the fields of morphometric data analysis and statistical computing. Regarded as a leader and innovator in modern morphometrics, Dr. Slice has offered new opportunities in skeletal analysis as a result of the development of the 3D-ID software for ancestry estimation from the cranium, and most recently, forAge software used to infer age of human remains from the pelvis.

“In forensics, the “Big Four” in establishing a biological profile are stature, sex, ancestry, and age-at-death,” said Dr. Slice. “Our software and methods provide new, objective methods for three of the four. For example, the 3D-ID software allows practitioners in the forensics community to determine the sex and ancestry of an unknown individual based on skull shape. The current software compares an unknown’s skull shape with over 2000 other skulls from the U.S., Latin America, and Europe. This is currently being extended to have a number of native African specimens. The forAge software implements methods in our lab to predict the age of an unknown specimen based on the morphology of the pubic symphysis — the front joint where one’s pelvis comes together.”

Testament to Dr. Slice’s commitment to disseminating knowledge and supporting young researchers as well as seasoned scholars is his administration of his MORPHOMET listserv, an international morphometrics mailing list and discussion forum that has nearly 900 members from around the world. In addition, he created and maintains the morphometrics.org website.

“I consider this the top honor of my career,” said Dr. Slice. “I am honored and humbled to join the ranks of such distinguished previous recipients as Bookstein, O’Higgins, and Halgrimsson.”

Dr. Slice’s broad contributions to the field of morphometrics spans three decades. He’s taught numerous international courses, workshops and seminars, and has been a mentor to many scientists worldwide. Dr. Slice has collaborated with lead researchers in a variety of fields including forensic sciences, orthodontics, evolutionary biology, biomedical engineering, paleoanthropology, evolutionary psychology and more.

Click here for more information on the Rohlf Medal.