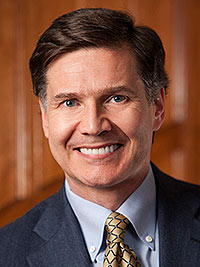 Dan Esty is the Hillhouse Professor at Yale University with appointments in both the Environment and Law Schools. He also serves as director of the Yale Center for Environmental Law and Policy and co-directs the Center for Business and the Environment at Yale. Esty is the author or editor of 10 books and dozens of articles on environmental protection, energy and sustainability — and their connections to policy, corporate strategy, competitiveness, trade and economic success. His prize-winning volume, Green to Gold: How Smart Companies Use Environmental Strategy to Innovate, Create Value, and Build Competitive Advantage, has been named the top-selling “green business” book of the past decade. Known for his path-breaking work at the business-energy/environment/sustainability interface, Esty has provided strategy advice to companies, governments, international organizations, NGOs and foundations around the world.

From 2011 to early 2014, Esty served as Commissioner of Connecticut’s Department of Energy and Environmental Protection where he earned a reputation for bringing fresh thinking to both energy and environmental policymaking, including such innovations as Connecticut’s first-in-the-nation Green Bank and a “LEAN” restructuring of all of Connecticut’s environmental programs to make the state’s regulatory framework lighter, faster, and more efficient and effective. Prior to taking up his Yale Professorship in 1994, he served in a variety of senior positions at the US Environmental Protection Agency and was a senior fellow at the Peterson Institute for International Economics in Washington, DC.

Abstract: Twenty-first century sustainability will need to build on very different foundations from 20th century environmental protection efforts. In law, a paradigm shift from “command and control” regulation is giving way to a new focus on economic incentives. In business, corporate leaders now recognize that an active approach to environmental issues and sustainability can yield competitive advantage and marketplace success. Drawing on firsthand experience in business, academia, and government, Professor Esty’s lecture will illustrate how smart companies use environmental strategy to innovate, create value and build competitive advantage. He will also discuss the future of state and federal governments in making the regulatory framework lighter, faster, and more effective.

This Provost’s Lecture, co-sponsored by the Department of Materials Science and Engineering, College of Business, Department of Technology and Society, Department of Chemistry and Sustainability Studies Program, will be held on Wednesday, December 3, at 4 pm in the Charles B. Wang Center Theater.