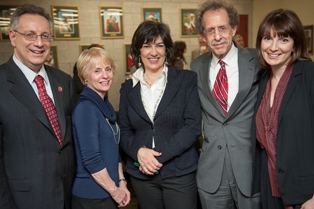 CNN Chief International Correspondent and ABC News Global Affairs Anchor Christiane Amanpour pledged a $50,000 gift to Stony Brook University’s School of Journalism in support of the Marie Colvin Center for International Reporting, which will be matched by a special grant from Jim and Marilyn Simons and the Simons Foundation for a total impact of $100,000. Amanpour’s generous gift will exponentially expand the Center’s ability to send student journalists on overseas reporting trips and assist in inspiring, training and nurturing the next generation of foreign correspondents. The School of Journalism hopes this gift will raise awareness for the need to increase international news coverage and help establish an endowment in Marie Colvin’s name.

The gift announcement was made during the inaugural Marie Colvin Distinguished Lecture Series, which marked the opening of the Center and for which Amanpour served as the guest speaker. Addressing a full house of students; members of the community; University officials and visiting journalists, including Toby Harnden, Washington Bureau Chief for the Sunday Times of London (where Colvin worked from 1985 until her death last year), Amanpour recalled working alongside Colvin in various hot zones around the world; addressed the ongoing conflict in Syria and the need for international intervention; and shared her path into journalism and the importance of continued international news coverage.

“I am delighted to support the Marie Colvin Center for International Reporting,” said Christiane Amanpour. “Marie was one of those rare journalists who believed in telling the human story of war. She also believed in mentoring young journalists, helping them discover that being a foreign correspondent can be the most noble and vital calling. I hope this Center will attract, educate and send forth future generations to follow in Marie Colvin’s footsteps.”

Marie Colvin was killed on February 22, 2012, in Syria while covering the Siege of Homs for The Sunday Times. Amanpour said of Colvin: “She had physical courage in bucketloads” but also “moral and intellectual courage.”

Amanpour’s gift comes on top of the past support she has provided to the Center, including $10,000 to help send student reporters to Kenya this past December on a Journalism Without Walls trip, and a $1,000 Overseas Press Club award that she donated at the launch of the Colvin Center fundraising campaign.

“Christiane gave us two powerful gifts,” said Howard Schneider, Dean of the Stony Brook University School of Journalism and longtime Newsday editor, “a significant financial contribution and an inspiring message to our students about why they should devote their lives to journalism, even risk their lives for journalism.”