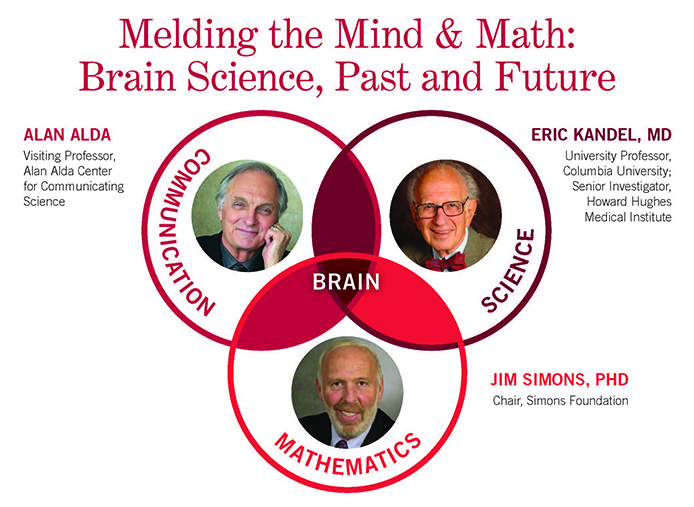 Stony Brook University is proud to celebrate 20 years of bringing the brightest minds in brain research to Long Island with its upcoming Mind/Brain event on Monday, April 4. Actor/director and science advocate Alan Alda will lead a discussion with Nobel Laureate Eric Kandel and renowned mathematician Jim Simons on the dynamic relationship between mathematics and neuroscience and why it may be the key to solving the mind’s most puzzling mysteries. This is the first time these three giants of science have appeared together.

This special event, hosted by the Department of Neurobiology and Behavior and sponsored by the Swartz Foundation, is intended for a general audience. Admission is free but seating is limited so please arrive early.

Alan Alda, acclaimed actor, writer and director, is a visiting professor at the Alan Alda Center for Communicating Science, where he helps current and future scientists learn to communicate more clearly and vividly with the public. For 13 years he was the host of the PBS series Scientific American Frontiers. After interviewing hundreds of gifted scientists around the world, he became convinced that many researchers have wonderful stories to tell but need to learn how to tell them better. That realization inspired the creation of Stony Brook University’s multidisciplinary Alan Alda Center for Communicating Science in 2009. Earlier this year the National Academy of Sciences presented Alda with its 2016 Public Welfare Medal for his contributions to communicating science.

Eric Kandel, MD, is University Professor and Fred Kavli Professor, Department of Neuroscience, Columbia University; founding director of the Center for Neurobiology and Behavior, College of Physicians and Surgeons at Columbia; and Senior Investigator, Howard Hughes Medical Institute. He is director of the Kavli Institute for Brain Science and co-director of the Mortimer B. Zuckerman Mind Brain Behavior Institute. He was a recipient of the 2000 Nobel Prize in Physiology/Medicine for his research on the physiological basis of memory storage in neurons. Kandel is the first author of a best-selling text for the study of Neuroscience: Principles of Neural Science, first published in 1981 and now in it’s fifth edition. He reached a broad general audience with his 2006 book In Search of Memory: The Emergence of a New Science of Mind, and most recently through his latest book, The Age of Insight: The Quest to Understand the Unconscious in Art, Mind, and Brain, from Vienna 1900 to the Present.

Jim Simons, PhD, is chair of the Simons Foundation, and founder and board chair of Renaissance Technologies LLC, a highly quantitative investment firm from which he retired in 2009 after serving as its CEO for more than 30 years. Previously he was chairman of the Department of Mathematics at Stony Brook University. Earlier in his career he was a cryptanalyst at the Institute for Defense Analyses in Princeton, New Jersey, and taught mathematics at the Massachusetts Institute of Technology and Harvard University. He is also the founder and chairman of Math for America, a nonprofit organization with a mission to improve math education significantly in our nation’s public schools.

About the Lecture Series

The Mind/Brain Lecture series was founded in 1996 by Jerry Swartz, co-founder of Symbol Technologies and an Emeritus Trustee of the Stony Brook Foundation. He initiated the series with the goal of bringing research in neuroscience to the general public. In doing so, he also brought the new field of computational neuroscience to the forefront.

“This series was very forward thinking of Dr. Swartz,” said Lorna Role, chair, Department of Neurobiology and Behavior. “Computational neuroscience was an up and coming area 20 years ago and he committed to it before it was widely accepted. He raised awareness to the importance of this field and its impact on brain research.”

For more on the history of Mind/Brain or the Swartz Foundation, visit stonybrook.edu/mindbrain.

To view this lecture from your office or home, visit stonybrook.edu/live.