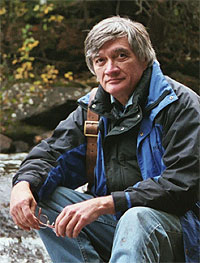 Rod Ewing is the Edward H. Kraus Distinguished University Professor at the University of Michigan. He is a professor in the Departments of Earth and Environmental Sciences, Nuclear Engineering and Radiological Sciences, and Materials Science and Engineering. He has published widely on issues related to nuclear materials, radiation effects in materials, nuclear waste management and nuclear waste policy, as well as on the use of nanomaterials in medical diagnostics/treatments and the response of materials to extreme environments.

Ewing is co-editor of and a contributing author to Radioactive Waste Forms for the Future and Uncertainty Underground – Yucca Mountain and the Nation’s High-Level Nuclear Waste. He has served on 11 National Research Council committees and two terms on the Board of Nuclear and Radiation Studies. He was recently appointed by President Obama to serve on the Nuclear Waste Technical Review Board and is a founding editor of the magazine, Elements.

Ewing received a Guggenheim Fellowship in 2002, the Dana Medal of the Mineralogical Society of America in 2006, the Lomonosov Gold Medal of the Russian Academy of Sciences in 2006 and an Honorary Doctorate from the Université Pierre et Marie Curie in 2007.

This Provost’s Lecture, co-sponsored by the Consortium for Interdisciplinary Environmental Research and the Department of Geosciences, as will be held on Thursday, April 26, at 3:00 pm in the Charles B. Wang Center Theater.

Abstract: During the past 70 years, ~2,000 metric tonnes of Pu, and substantial quantities of the “minor” actinides, such as Np, Am and Cm, have been generated in nuclear reactors. There are two basic strategies for their disposition: (1) to “burn” or transmute them using nuclear reactors or accelerators or (2) to “sequester” them in durable materials for geologic disposal. Both options will be discussed along with recent developments in the materials science of transuranium elements.

Stony Brook University’s Facilities & Services Division is proud to announce the completed construction of Building K in the West Apartments. Maintaining a consistent layout with other student housing across the...

The new name aligns more closely with the School's expanding degree programs and with the increased demand for professionals from communication-related disciplines.

Earthstock 2021 features a mix of in-person and virtual events this week, as the University kicks off its annual, weeklong celebration of Earth Day. The keynote lecture, “Wild Long Island,”will be at 4 p.m...