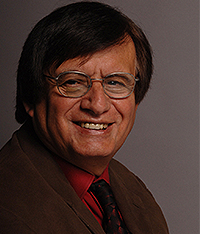 Building a Culture of Diversity in Higher Education: Obstacles and Successes

Richard Tapia, the 2010 awardee of the National Medal of Science, is a mathematician in Rice University’s Computational and Applied Mathematics Department. He holds the rank of University Professor, Rice’s highest academic title awarded to only six individuals in the university’s history. Among his many honors, Tapia was an awardee of the 2014 Vannevar Bush award; elected to the National Academy of Engineering (the first Hispanic to receive this honor); and holds honorary doctorates from Carnegie Mellon University, Colorado School of Mines, University of Nevada and Claremont Graduate University. Two professional conferences have been named in his honor: the Richard Tapia Celebration of Diversity in Computing Conference and the Blackwell-Tapia Mathematics Conference. He served on the National Science Board from 1996 to 2002. Because of his leadership, Rice University is recognized as a national leader in the preparation of women and underrepresented minority doctoral degree recipients in science, engineering and mathematics.

Abstract: Extreme growth in the nation’s Hispanic population is forcing educational challenges at a crisis level for the country. The problem is exacerbated by the fact that this fastest growing segment of the nation’s population continues to be the least educated. The speaker warns that the rate at which the minority population is growing outpaces the rate at which we are improving our effectiveness in educating this segment of the population. The speaker’s remarks will focus on the obstacles that the nation’s  universities must overcome in order to improve representation at the graduate and faculty levels in science, engineering and mathematics. He will discuss the role that mathematicians play in contributing to the representation failures. The speaker also will discuss his successful Rice program for improving graduate student representation and the challenges that he has faced throughout his journey from being born in Los Angeles to parents who immigrated from Mexico to his trip to the White House to receive the 2011 National Medal of Science from President Obama. The National Medal of Science is the highest award given by the United States government, and Richard Tapia is the first Latino to win this prestigious award.

This Provost’s Lecture, co-sponsored by the Institute for Advanced Computational Science and Center for Inclusive Education, will be held on Monday, April 18, at 4 pm in the Charles B. Wang Center Theater.