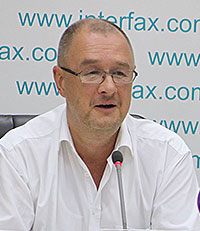 Ukraine between “The East” and “The West:” The Final Cut?

Georgiy Kasianov is head of the Department of Contemporary Politics and History at the Institute of the History of Ukraine, Kyiv, Ukraine. He is the author, editor and co-author of more than a dozen books and collected volumes on the modern history of Ukraine, Ukrainian nationalism and the politics of history, including A Laboratory of Transnational History: Ukraine and Recent Ukrainian Historiography and Danse Macabre: The Great Famine of 1932-1933 in Politics, Mass Consciousness and History Writing, 1980s-2000s. His scholarly interests include the modern history of Europe, methodology of history, intellectual history (Europe, US), history of Ukraine, education policy and teaching/learning methods.

Abstract: The most conventional vision of Ukraine holds that this country is historically locked in an ambivalent position between “the West” (or Europe) and “the East” (as a rule equated to Russia). Additionally, Ukraine has its own internal East-West division determined by different political, cultural and historical legacies. The recent Maidan revolt started as a protest against halting the pro-European, pro-Western drive of Ukraine. In fact, contemporary events in Ukraine — the Revolution of Dignity, the war in the east of the country, attempts of broad societal reforms aimed at future accession to the European Union — manifest the most decisive attempt to overcome the East-West ambivalence in favor of “the West” and “Western civilization.”

This Provost’s Lecture, co-sponsored by the Post-Socialism Research Institute; Department of History; Department of European Languages, Literatures and Cultures; and the Humanities Institute, will be held on Thursday, April 16, at 5 pm in Humanities 1006.