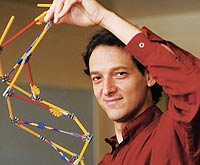 Itsik Pe’er is an associate professor of computer science at the Center for Computational Biology and Bioinformatics at Columbia University. His research involves developing computational methods for analysis of human genetic variation as part of the Genetic Analysis Information Network and the Cancer Genome Atlas projects. Previously, Pe’er participated in the International HapMap project during his postdoctoral research at Massachusetts General Hospital and the Broad Institute of Harvard and MIT. He holds BSc, MSc and PhD degrees in computer science from Tel Aviv University, where he developed computational solutions to problems in genome sequencing and evolution.

Abstract: The Ashkenazi Jewish population, currently including ~10 million individuals, has long been recognized as genetically isolated and therefore advantageous for genetic studies. Yet only recently available high-throughput genetic data and mathematical modelling allowed reconstructing the unique demographic history that led to this isolation. It appears that Ashkenazi Jews had descended from a very small group, equivalent to hundreds of individuals, as recently as the late medieval times. This makes it feasible to catalog genetic variation in this group, for better-personalized medicine. In a collaborative effort across multiple New York institutions, we have constructed a catalog of complete Ashkenazi genomes. We show that this group has ancestry in both the Levant and in Europe. Moreover, this admixed ancestry allows placing a timestamp on the event of these two ancestral populations splitting. We show that this occurred much later than the initial colonization of Europe, indicating that the current Europeans are mostly not descended from the first humans in this continent.

This Provost’s Lecture, co-sponsored by the Department of Ecology and Evolution and the Laufer Center for Physical and Quantitative Biology, will be held on Thursday, April 10, at 4:30 pm in the Charles B. Wang Center, Lecture Hall 2.