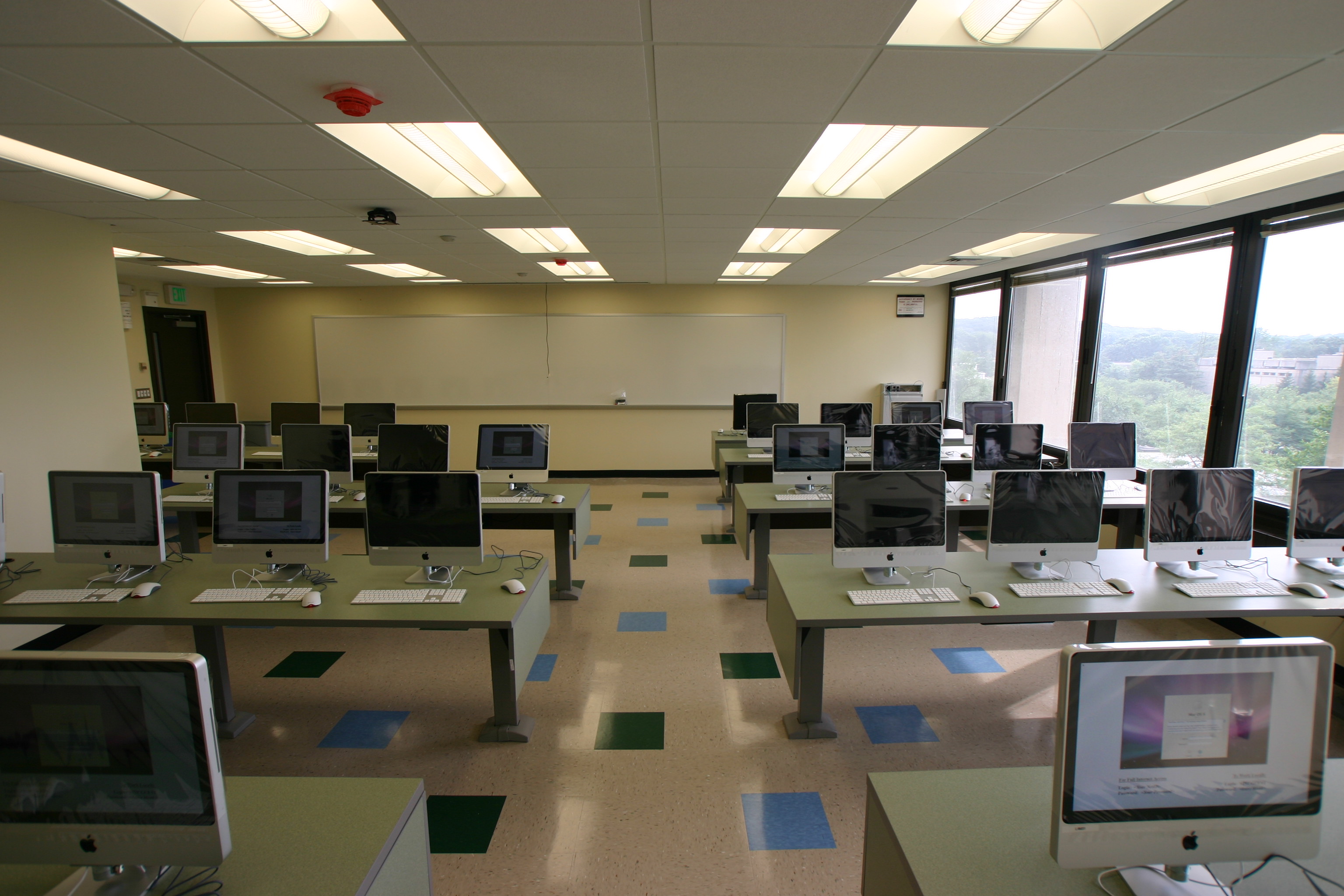 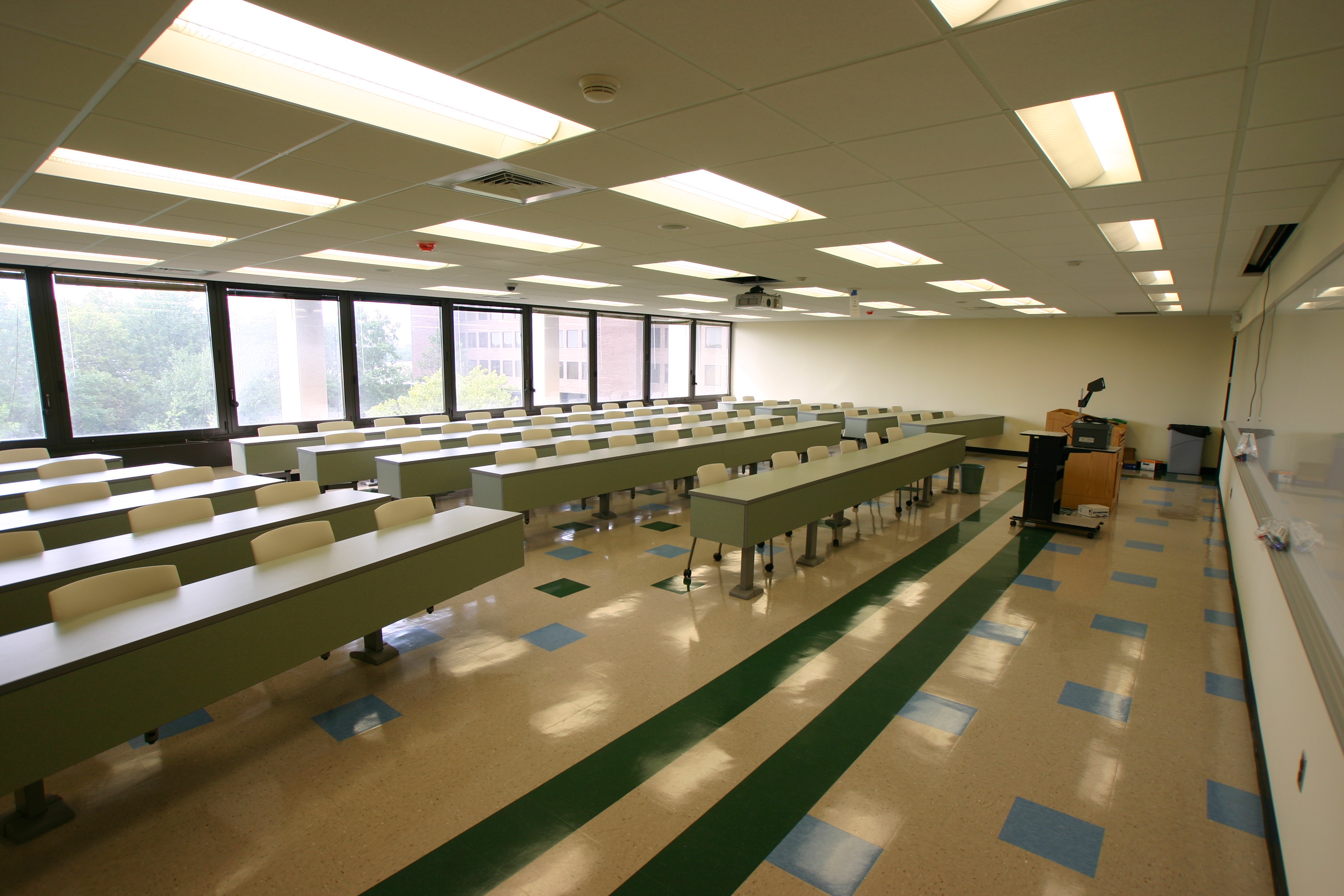 When the Procurement Office moved its center of operations from the Melville Library to the Research and Development Campus, the Teaching, Learning + Technology Department (TLT) was assigned Procurement’s old space and charged with turning it into a haven for faculty teaching and student learning. In partnership with the Office of Campus Planning, Design, and Construction, six new classrooms were created in time for the fall 2009 semester. The project was completed with full recognition of the fact that the Old Chemistry Building will undergo its own makeover at the end of the spring 2010 semester to increase the number of general-purpose classrooms on campus.

“The fourth floor of the library was kind of an experiment to get us ready for the rehab of the Old Chemistry Building,” said Gary Van Sise, Director of Educational Technologies, who oversees academic facilities management for TLT. “We’re all very much looking forward to working on that. It will be three floors of classrooms plus three new lecture halls. We see this upcoming project as having as big of an impact as when the Student Activities Center replaced the Union. It’s going to be a bright, clean, wonderful new environment for teaching and learning.”

Van Sise reviews all the electrical and photometric data in a classroom to make sure lighting levels are proper at each desktop. Educational Technologies coordinator Jack Franqui makes sure classroom furniture is consistent with the requirements of the Americans with Disabilities Act and handles most of the finishing touches, including board installs and wall art. Engineers Rich Holliday and Mike Hicks design and install all the media systems in the rooms. With respect to the fourth floor library classrooms, the Educational Technologies team worked closely with University architect Umi Yoshino-Hempel, construction managers Lou Spero and Mike Murray, and designer Regina Lento from Stony Brook’s Facilities and Services group.

Five of the six classrooms on the fourth floor of the library are general-purpose classrooms. One is a computer classroom boasting all new Macintosh computers. The School of Journalism had a need for a computer classroom with Macs, so they helped fund the technology. It is a registrar-scheduled room where Journalism gets priority, but it’s available for other groups when Journalism is not using it.

A New Generation of Classrooms
Graham Glynn, Assistant Provost and Executive Director of TLT, calls the six classrooms on the fourth floor of the library the first set of a new generation of classrooms. He prefers to call them “active learning environments.” The plan is to infuse all Stony Brook classrooms with a little more verve.

“We wanted to make the classrooms more enjoyable places to spend time,” said Glynn. “Gary’s group worked with the team from Facilities and Services to brighten up the colors, add patterns to the floors, architectural detail to the ceilings, and they loaded them with technology. In some cases, even the seating is vastly different.”

The design team was looking for colors to energize, stimulate, and keep room occupants aware. They chose a color palette made up of invigorating blues, relaxing greens, and calming yellows. Large and small details were taken into account. The first row in each classroom has mobile seats to make things easier for students with disabilities.

In terms of technology, the rooms are equipped with a full multi-media package that includes projectors, screens, audio, DVD/VHS players, and lecterns (some of which have built-in, dual-boot computers so instructors can choose to use Mac or Windows). All rooms have wireless (AirNet) connectivity, pull-down workstations for laptops, video and network connections, and lighting controls. Two of the classrooms have a camera built in to the ceiling so faculty members can record their class session using SBCapture, which converts classroom voice, video, and visual aids into high-quality media files that students can access online.

Depending on the size of the room, there is either a giant whiteboard or blackboard at the front of the room. Additionally, in one classroom, there are whiteboards on wheels (called huddle boards) that students can use when working in groups. The portable white boards can be popped off of their stands and mounted on the rail of the larger board at the front of the classroom. This comes in handy if a group wants to present their work to the rest of the class.

Even the corridors outside the classrooms are part of the picture. Whiteboards were installed on the walls in between each classroom and the color in the floors was carried out into the hallway.

TLT faces some challenges in realizing its full vision for active learning spaces, not the least of which is the current fiscal climate due to the projected statewide budget cuts. Glynn is also sensitive to the challenge that exists between getting as many students as possible into a classroom and being able to make the classroom interactive.

When the Old Chemistry Building is finished, it will reopen as the best-equipped building on campus, with the nicest classrooms, a computerized testing facility, a video conferencing facility, and a professional audio-visual staff in the building to respond to issues. Van Sise says it is all part of a plan to build collaborative classrooms that serve a whole new way of teaching. 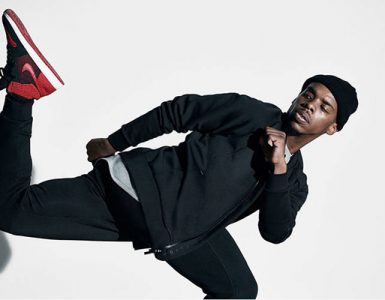 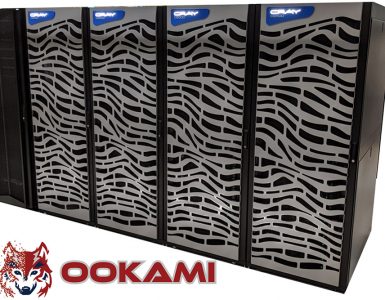