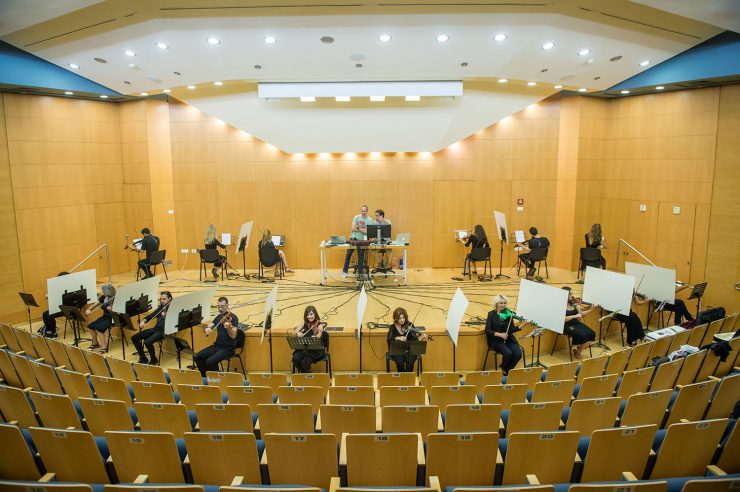 STONY BROOK, NY, August 12, 2020 – Human networking involves every field and includes small groups of people to large, coordinated systems working together toward a goal, be it traffic management in an urban area, economic systems or epidemic control. A new study published in Nature Communications suggests by using a model of violin synchronization in a network of violin players, there are ways to drown out distractions and miscommunications that could be used as a model for human networks in society.

Titled “The Synchronization of Complex Human Networks,” the study was conceived by Elad Shniderman, a graduate student in the Department of Music in the College of Arts and Sciences at Stony Brook University, and scientist Moti Fridman, PhD, at the Institute of Nanotechnology and Advanced Materials at Bar-llan University. He co-authored the paper with Daniel Weymouth, PhD, Associate Professor of Composition and Theory in the Department of Music and scientists at Bar-llan and the Weizmann Institute of Science in Israel. The collaboration was initiated at the Fetter Museum of Nanoscience and Art.

The research team devised an experiment involving 16 violinists with electric violins connected to a computer system. Each of the violinists had sound-canceling headphones, hearing only the sound received from the computer. All violinists played a simple repeating musical phrase and tried to synchronize with other violinists according to what they heard in their headphones.

According to Shniderman, Weymouth and their fellow authors: “Research on network links or coupling has focused predominantly on all-to-do coupling, whereas current social networks and human interactions are often based on complex coupling configurations.

This study of synchronization between violin players in complex networks with full control over network connectivity, coupling strength and delay, revealed that players can tune their playing period and delete connections by ignoring frustrating signals to find a stable solution. These controlled and new degrees of freedom enable new strategies and yield better solutions potentially applicable for other human networking models.”

“Society in its complexity is recognizing how human networks affect a broad range of crucial issues, including economic inequality, stock market crashes, political polarization and the spread of disease,” says Weymouth. “We believe there are a lot of important, real-world applications to the results of this experiment and ongoing work.”

To view how the experiment is carried out and for additional perspective from Shniderman, see this video titled SYNC Variations.

Students across the country are preparing to head back to campus this fall amid the ongoing pandemic. Many universities including Stony Brook University are moving forward with new instruction models as well as new...