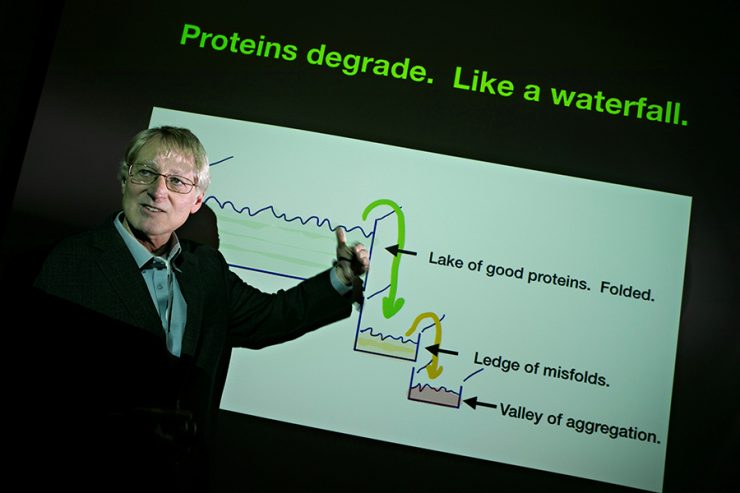 STONY BROOK, NY, October 16, 2019 – Cells undergo natural aging and death, processes that impact a multitude of cellular factors. A new Stony Brook University-led study published online in PNAS, provides a biophysical model that reveals how damage accumulates in the shapes of cellular proteins with age and is a trigger to death. The finding opens a door to a better understanding of the molecular origins of age-related neurodegenerative diseases, such as Alzheimer’s and Parkinson’s disease, which all entail protein damage.

Co-author Ken A. Dill, PhD, Distinguished Professor and Director of the Laufer Center for Physical & Quantitative Biology at Stony Brook, said that the research team developed a Proteome Collapse Model that explores a central question in biology: How does the folding health of proteomes (collection of all the cell’s proteins) change with damage and age?

The team created a model of the worm (C. elegans), common to studies of cellular aging. They tested how proteostasis – the successful folding, aggregation and chaperoning of proteins – is affected by cumulative oxidative damage. Their model explains the remarkable fact that worms raised at 20 degrees Celsius have a lifespan of 20 days, but those worms raised at higher temperatures or in the presence of free radicals have a lifespan of only a few hours. They found this lifespan shortening to be consistent with the nature of the proteome collapse process. They also showed how it predicts the C elegans survival curve (how many individuals are still alive at any given age).

“This modeling is unique by being mathematically detailed and describing a broad range of cellular processes across the cell’s whole proteome,” explains Dill.  “Often, aging-related studies look at the effects of one or two proteins at a time, rather than seeking, more generally, the cellular aging mechanism itself.”

The scientific approach also creates a foundation for further research into the molecular origins of age-related diseases based on protein misfolding processes.

This research was supported in part by the Laufer Center and the National Science Foundation (grant # PHY1205881).

About Stony Brook University
Stony Brook University is going beyond the expectations of what today’s public universities can accomplish. Since its founding in 1957, this young university has grown to become a flagship as one of only four University Center campuses in the State University of New York (SUNY) system with more than 26,000 students and 2,600 faculty members, and 18 NCAA Division I athletic programs. Our faculty have earned numerous prestigious awards, including the Nobel Prize, Pulitzer Prize, Indianapolis Prize for animal conservation, Abel Prize and the inaugural Breakthrough Prize in Mathematics. The University offers students an elite education with an outstanding return on investment: U.S. News & World Report ranks Stony Brook among the top 50 public universities in the nation. Its membership in the Association of American Universities (AAU) places Stony Brook among the top 62 research institutions in North America. As part of the management team of Brookhaven National Laboratory, the University joins a prestigious group of universities that have a role in running federal R&D labs. Stony Brook University is a driving force in the region’s economy, generating nearly 60,000 jobs and an annual economic impact of more than $7.2 billion. Our state, country and world demand ambitious ideas, imaginative solutions and exceptional leadership to forge a better future for all. The students, alumni, researchers and faculty of Stony Brook University are prepared to meet this challenge.