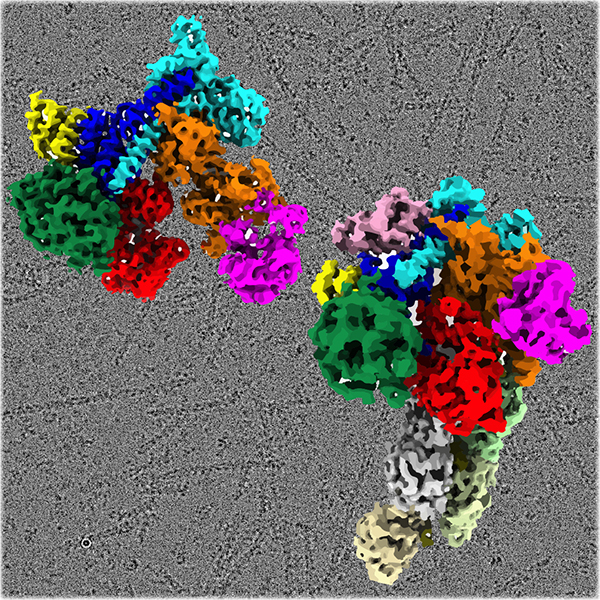 STONY BROOK, NY, August 25, 2020 – More than two decades ago scientists discovered the Arp2/3 complex, an actin (cellular protein) cytoskeketal nucleator which plays a crucial role in cell division, immune response, neurodevelopment other biological processes. But there has been no determined structure of the activated state of the complex until now, an achievement that may lay the foundation for uncovering its role in biology and in the development of disease. Researchers at Stony Brook University led by Saikat Chowdhury, PhD, determined the structure of Arp2/3 and describe it in a paper published in Nature Structural and Molecular Biology.

Chowdhury, and graduate student and first author Mohammed Shaaban determined the first near-atomic resolution structure of Arp2/3 in its active state by using cryo-electron microscopy. The structure shows the complex in its active form and bound to a signaling molecule. It also shows the nucleated actin filament, thus providing a structural snapshot of the global and local conformational changes in the Arp2/3 complex that help grow new actin filament in cells.

“Obtaining the macromolecular structure of activated Arp2/3 complex has been a long-standing goal for scientists,” says Chowdhury, senior author and an Assistant Professor in the Department of Biochemistry and Cell Biology in the College of Arts and Sciences at Stony Brook University.  “Our structure reveals a level of molecular details which show the individual components of the complex and how they are positioned relative to each other in the active state.”

Having a structure of Arp2/3 in its active state will help drive more detailed research of the complex. Chowdhury explains that this is extremely important because when Arp2/3 is deregulated in the biological state, it is associated with cancer metastasis, neurodegeneration, bacterial and viral infections and wound healing problems.

“So not only does this structure enable us to fill a knowledge gap in the actin cell biology field, it potentially helps to build our understanding of the underlying causes of a number of diseases with the ultimate goal of developing new therapeutics,” emphasizes Chowdhury.

Determining the Arp2/3 structure in its activated state required the researchers to use technologies available in Stony Brook University’s Cryo-Electron Microscopy Facility, a center supported by the National Institutes of Health (NIH), and the High Performance Computing capabilities in the Division of Information Technology.

Stony Brook University, widely regarded as a SUNY flagship, is going far beyond the expectations of today’s public universities. With more than 26,000 students, 2,700 faculty members, over 200,000 alumni, an academic medical center and 18 NCAA Division I athletic programs, it is one of only four University Center campuses in the State University of New York (SUNY) system. The University embraces its mission to provide comprehensive undergraduate, graduate, and professional education of the highest quality, and has been ranked among the top 35 public universities in the nation by U.S. News & World Report. Fostering a commitment to academic research and intellectual endeavors, Stony Brook’s membership in the Association of American Universities (AAU) places it among the top 65 research institutions in North America. The University’s distinguished faculty have earned esteemed awards such as the Nobel Prize, Pulitzer Prize, Indianapolis Prize for animal conservation, Abel Prize and the inaugural Breakthrough Prize in Mathematics. Part of the management team of Brookhaven National Laboratory of the U.S. Department of Energy, Stony Brook is one of only eight universities that has a role in running a national laboratory. Providing economic growth for neighboring communities and the wider geographic region, the University totals an impressive $7.23 billion in increased economic output on Long Island. Follow us on Facebook and Twitter (@stonybrooku).