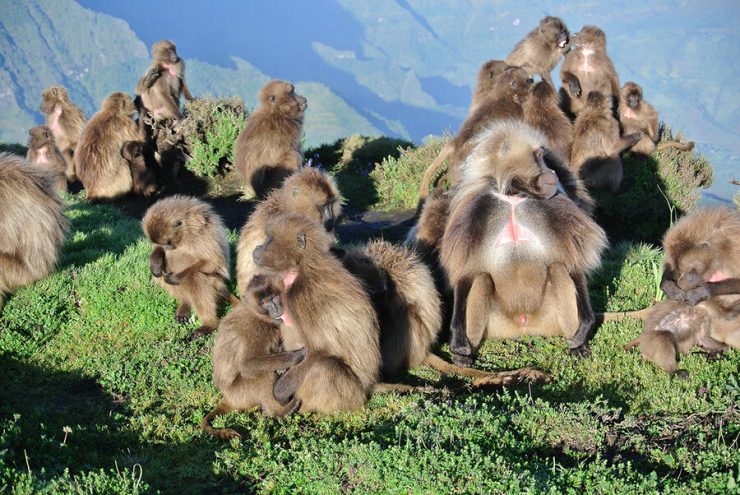 STONY BROOK, NY, June 2, 2021 – Scientists have long had difficulty establishing the group size that best allows animals to live long lives and raise many surviving offspring. But now a research team that includes Anthropology researchers from Stony Brook University has used 14 years of demographic data on multiple groups of wild geladas (an Old World monkey species) to determine that mid-size group living is best for fitness, essentially optimizing survival and reproduction. Details of the findings are published in the Proceedings of the Royal Society B.

The link between group size and individual fitness has long been a focus of socioecological theory, yet difficult to demonstrate for long-lived species such as geladas.

In this study the researchers used a large sample size of wild geladas (200 adult females from 46 groups) living in the Simien Mountains National Park in northern Ethiopia. These animals have been followed for much of their lives, allowing researchers to examine reproductive outcomes and survival rates for females and their offspring.

“Overall, our study findings show that optimal group size could actually be linked to infanticide risk as well as predation,” says co-author Amy Lu, PhD, Assistant Professor in the Department of Anthropology in the College of Arts and Sciences at Stony Brook University. “This has implications for a whole suite of group-living animals, such as other primates and lions, where infanticide may be a risk factor for female fitness and infant survival.”

The research findings support the hypothesis that infanticide risk is a major driver of group size for leaf- and grass-eating mammals, where feeding competition is relatively low. However, females in too-large and too-small groups may not be doomed.

“When we think about why humans evolved to be so smart – or why any animal evolved to be so smart – we could argue that it is either because they have a complicated environment (where it’s hard to find food or stay alive) or a complicated social life. It’s an either-or,” says Michigan State University’s Elizabeth Tinsley Johnson, an assistant professor of Integrative Biology and the first author of the new study. “What this study shows is that you can’t pull those things apart. They are intertwined, such that the groups individuals live in influence their ability to find food and stay alive, and together these factors interact to determine individual fitness.”

“Although it’s difficult for small groups to increase their group size to a more optimal size, large gelada groups sometimes split into two or more smaller groups,” says co-first-author Jacob Feder, PhD Candidate in the Interdepartmental Doctoral Program in Anthropological Sciences at Stony Brook University. “By getting closer to the optimal group size, these females could improve their lot in life. But, splitting apart means severing social bonds, so females have to carefully choose who to stay with and who to part ways with.”

According to Lu, Feder, and co-authors, the research suggests that female geladas in mid-sized groups achieve the highest fitness and provide insight into how and why group size shapes the fitness of long-lived species, such as geladas.

The research is supported in part by the National Science Foundation (NSF) (including Lu’s NSF grant # BCS1723228), Leakey Foundation, National Institutes of Health, and the National Geographic Society.