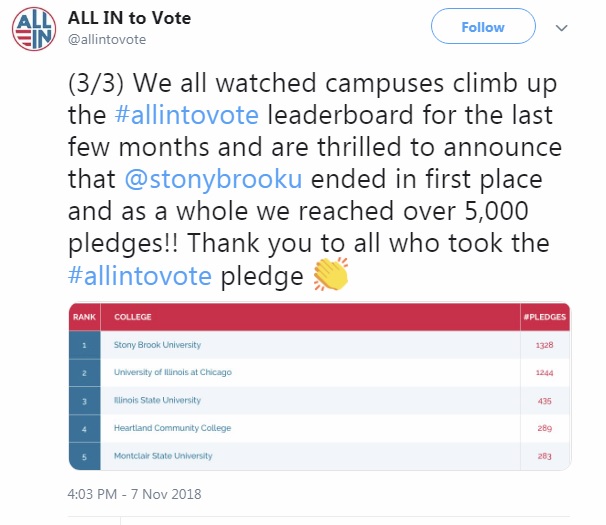 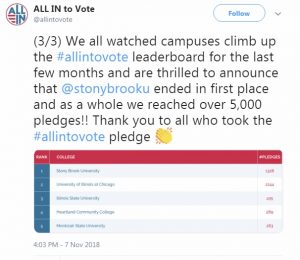 Stony Brook, New York, November 8, 2018 — The results are in, and Stony Brook University’s students topped the All In Challenge charts with more than 1,300 students pledging to vote in the 2018 Midterm Election on Tuesday. Among the 455 universities participating in the challenge, Stony Brook’s participation was the highest, earning the SUNY Long Island flagship first place in the national challenge.

According to the National Study of Learning, Voting, and Engagement from the Jonathan M. Tisch College of Citizenship and Public Service at Tufts University, about 43 percent of Stony Brook University students voted in the November 2012 Presidential Election — 3.7 percentage points lower than all colleges and universities nationwide.

This year, 1,769 total votes were cast by Stony Brook students at the on-campus polling site, marking an increase of more than 300% since the 2014 Midterm Election.

Since 2015, when Stony Brook established a partnership with The Andrew Goodman Foundation and its Vote Everywhere program, organized by Campus Champions Steven Adelson, who also serves as an Area Coordinator, and Ellen Driscoll, Interim Associate Dean of Students, the university has developed action plans for the 2016 and 2018 elections to increase voter turnout among students. In the three years, more than 13,000 undergraduate, graduate and professional students have registered to vote; voter turnout has increased by 23 percent from 2012 through 2016; and the on-campus polling site in 2016 achieved an 86 percent voter turnout rate, which was the highest of any polling site in the country for the 2016 Presidential Election.

This year, Stony Brook scheduled events and initiatives throughout the year, beginning in late January, to encourage students to register to vote as well as participate in the party primaries in June and September and also the Midterm Election on Tuesday. The four-point action plan for 2018 included:

To accomplish these goals, Stony Brook hosted community dialogue sessions about local issues, provided out-of-area students with access to absentee ballots for all 50 states and educated voters about ballot initiatives as well as candidate platforms.

Stony Brook’s Center for Civic Justice also invested time into helping students register to vote, including Class of 2019’s Yark Beyan, who spent four days a week at the Student Activities Center at a registration table. Since 2015, Beyan has helped register more than 17,500 students. This semester, she and 43 interns she supervises for the center have registered an additional 2,733 students.