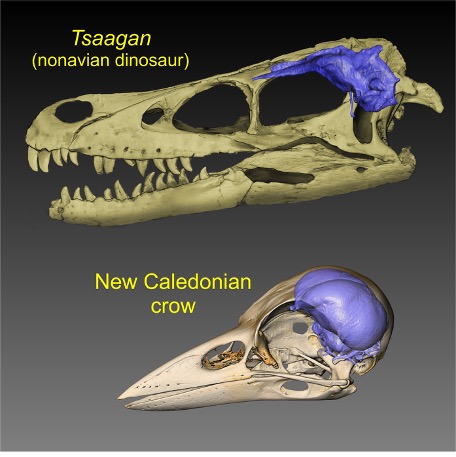 STONY BROOK, NY, April 23, 2020— An international team of evolutionary biologists and paleontologists, including Stony Brook University’s own Dr. Jeroen Smaers, Associate Professor, Department of Anthropology, have reconstructed the evolution of the avian brain using a massive dataset of brain volumes from dinosaurs, extinct birds like Archaeopteryx and the Great Auk, and modern birds.

The study, published online today in the journal Current Biology, reveals that prior to the mass extinction at the end of the Cretaceous Period, birds and non-avian dinosaurs had similar relative brain sizes. After the extinction, things changed dramatically and the brain-body scaling relationship rapidly shifted as some types of birds underwent an explosive radiation to re-occupy ecological space vacated by extinct groups.

In order to understand how bird brains changed, a team of 37 scientists used CT scan data to create endocasts (models of the brain based on the shape of the skull cavity) of hundreds of birds and dinosaurs, which they then combined with a large existing database of brain measurements from modern birds. They then analyzed brain-body allometry: The way brain size scales with body size. The new study finds that parrots and crows exhibited very high rates of brain evolution that may have helped them achieve such high proportional brain sizes.

“Crows are the hominins of the bird kingdom,” said Smaers, who co-authored the study. “Like our own ancestors, they evolved proportionally massive brains by increasing both their body size and brain size at the same time, with the brain size increase happening even more rapidly.”

##
About Stony Brook University:
Stony Brook University, widely regarded as a SUNY flagship, is going far beyond the expectations of today’s public universities. With more than 26,000 students, 2,700 faculty members, nearly 200,000 alumni, an academic medical center and 18 NCAA Division I athletic programs, it is one of only four University Center campuses in the State University of New York (SUNY) system. The University embraces its mission to provide comprehensive undergraduate, graduate, and professional education of the highest quality, and has been ranked among the top 35 public universities in the nation by U.S. News & World Report. Fostering a commitment to academic research and intellectual endeavors, Stony Brook’s membership in the Association of American Universities (AAU) places it among the top 65 research institutions in North America. The University’s distinguished faculty have earned esteemed awards such as the Nobel Prize, Pulitzer Prize, Indianapolis Prize for animal conservation, Abel Prize and the inaugural Breakthrough Prize in Mathematics. Part of the management team of Brookhaven National Laboratory of the U.S. Department of Energy, Stony Brook is one of only eight universities that has a role in running a national laboratory. Providing economic growth for neighboring communities and the wider geographic region, the University totals an impressive $7.23 billion in increased economic output on Long Island. Follow us on Facebook (https://www.facebook.com/stonybrooku/) and Twitter(@stonybrooku).