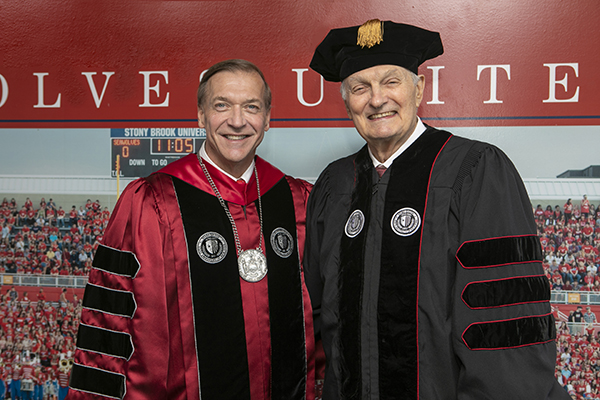 STONY BROOK, NY– May 24, 2019 — Stony Brook University honored the largest graduating class in its history today at Kenneth P. LaValle Stadium. The Class of 2019 joins the ranks of nearly 200,000 Seawolves worldwide, united by a vision of a bold new future.

“Distinguished members of the Class of 2019, you are among the more than 7,500 students that will receive a total of 7,625 degrees from Stony Brook University this year,” said President Samuel L. Stanley Jr., in his milestone 10th commencement address. “That is an all-time record on both counts. Our graduates span 69 countries, 39 states, and range in age from 18 to 72, and we are proud of each and every one of you.”

A highlight of the ceremony was when Alan Alda, award-winning actor, polymath, and the inspiration behind the Alan Alda Center for Communicating Science at Stony Brook University, spoke to the class of 2019 after receiving a Doctor of Fine Arts honorary degree, conferred on behalf of the State University of New York by Trustee, Cary Staller, and President Stanley, who said, “You are an acclaimed actor, director and writer, and a steadfast champion for science communication and women’s rights. You have received international recognition for your 60-plus-year career in theater, television and film and have earned seven Emmy awards and six Golden Globes. You created the much-loved character of Hawkeye Pierce on the groundbreaking TV show M*A*S*H, as well as other memorable characters on The West Wing and 30 Rock, and in numerous award-winning films. Your love of science drew you to PBS, where you hosted Scientific American Frontiers for 12 years, bringing top scientists into the homes of millions. In 2009, you brought your commitment to science education to Stony Brook University, helping to found the Alan Alda Center for Communicating Science. The Alda Center empowers scientists to communicate complex topics in engaging ways, helping to facilitate the understanding of scientific information by the public. You have received numerous awards for this work, including the National Academy of Science’s Public Welfare Medal and the Scientific American Lifetime Achievement Award. And your work continues as you tirelessly strive to improve the dissemination of scientific information throughout the world. For the lasting impact you have made on our society, the State University of New York is honored to award you the honorary degree of Doctor of Fine Arts.”

“I’m so proud of our team [at the Center for Communicating Science] and what we’ve brought to the surface is something that every human needs to bring to the surface, which is empathy — the ability to connect with another person so that when you try to communicate something to them,” Alda told the class of 2019. “Whether it’s something complex like science or medicine … whether you’re a doctor talking to a patient and you have to tell that patient what they can do to get healthy again…or even to face death. You need to be able to compassionately talk with them; to take them into account. You’re not just rattling off what you know. And by now you all know a lot. But you have to connect with the other person to communicate with them, even if it’s something as complex as your own feelings toward a partner.”

“It takes work,” he said. “But here’s the thing – if you dig down under the surface to bring to the surface your own dream your own thing that motivates you that makes you want to help other people that is born from your sense of generosity, the work you do to accomplish that dream won’t seem like work. It’ll seem like fun. That’s how it’s been for me. And you may find as I’ve found that the dream you start out with can morph into some other dream and another dream after that.”

Also receiving an honorary degree this year is “Crittercam” inventor and Stony Brook University Marine Sciences master’s program alumnus, Greg Marshall, ‘88. Crittercam is the game-changing video/audio system that allows humans to experience the world through an animal’s perspective on land or in the sea, to study behavior in the wild. “Greg, you are an intrepid marine scientist, an ardent conservationist, an award-winning cinematographer and a fearless adventurer. For creating a window into the natural world and encouraging a new generation of conservationists,” said Provost Michael Bernstein during the Doctoral Hooding ceremony on May 23, “Stony Brook University is proud to bestow upon you the honorary degree of Doctor of Science.”

“It is such a privilege to be part of this great community,” said Marshall. “This academic family, where I was given the freedom to explore new and untested research opportunities; encouraged to innovate and develop new technologies and inspired to share discovery as broadly as possible.  I’m so grateful for all the support and encouragement I had along the way.   I’m proud to be here at Stony Brook.”

President Stanley spoke of the value of a Stony Brook Education. He highlighted four students among the class of 2019 who excelled, explaining that he would’ve liked to feature every student, but after doing the math, at five minutes per student, it would have prolonged the ceremony by about nine days, so he focused on four. He mentioned Hispanic Languages and Literature major Belinda Castiblanco who moved to the United States from El Salvador when she was 18 years old, married and a mother of two who spoke no English. Belinda excelled at Stony Brook, becoming a scholar of English and Spanish literature and winning the Alpha Sigma Lambda award recognizing outstanding non-traditional students, and the Sanchez Scholarship for her achievements. He also recognized international student and Psychology and Applied Mathematics double major Yilin Liu, whose interest in neuroscience in aging and neuroimaging research have led her to the PhD program in Cognitive Neuroscience Systems in the Department of Psychology at the University of Arizona.

He called out Yark Beyan, graduating with her Bachelor of Arts degree in Political Science and a minor in International Studies, for her leadership role on the President’s Council of Student Advisors, as a student ambassador, as an undergraduate college fellow responsible for mentoring students during their transition from high school to college, and as a Stony University tour guide. Yark also helped found Stony Brook University’s Center for Civic Justice and has helped register more than 17,500 students to vote during her time at SBU. Finally, Dr. Stanley recognized Doctorate of Musical Arts in Voice Performance student, Ju Hyeon Han, who performed the Star-Spangled Banner and the Stony Brook Alma Mater, “Sandy Shores,” at the 2017 commencement ceremony. Now among the graduates, Dr. Stanley praised Han for achieving her goal to become a singer while blind. “She needs to spend hours memorizing her scores, and having them rendered in Braille,” he said. “Even more challenging is Opera, with spoken lines and stage direction, and she became one of the few individuals who is blind to perform a major role at the collegiate level when she performed in Benjamin Britten’s opera the Rape of Lucretia at SBU.”

T’Kheya-D’Vrehy Yisrael, the student speaker, a Brooklyn native graduating with a double major in Biochemistry and Sociology with a concentration in Psychology, is the president of the Black Student Union and Delta Sigma Theta Sorority, Inc., as well as committee member for numerous diversity and advocacy councils at Stony Brook. She served as a Resident Assistant for three years, mentoring students as they navigated their own collegiate journeys. Most recently, she received two competitive scholarships in commemoration of her leadership and social justice involvement on campus and worked for two years as a Marketing and Communications Intern with the Faculty Student Association.

“College is hard, but Stony Brook is harder and we made it!” said Yisrael, who starts a new career in sales at Eaton, a global power management company, in July. “The culmination of all of our late-night study sessions, and praying for those ‘abundance of caution’ emails (but regretting them when the professor didn’t push the midterm back); of all the positions we were blessed to get and all the ones we didn’t; of skipping one class to study for another — isn’t just a degree from Stony Brook University. From the moment you stepped foot on this campus until now, you’ve grown.”

As part of the ceremony, Senior Class Senator Jim Lo presented President Stanley with the Senior Class Legacy gift generated from 642 student donations in the amount of $21,614.55. Graduates who gave $20.19 or greater wore “Generosity Cords,” regalia items to symbolize their generosity. The funds will be used to support the Stony Brook Fund for Excellence, General Scholarships, the Renaissance School of Medicine, the School of Nursing, the Marching Band, Student Life, the Staller Center and many other areas of the University.

“As contributors, we are not only helping to leave our mark here at Stony Brook, but are also demonstrating our citizenship to the world and taking the first step in becoming active, loyal alumni,” said Lo. “We hope that our contribution will allow us to leave a living legacy to the university and community.”

“I am so proud of the senior class and thank them for this gift,” said President Stanley. “As we had promised, my wife, Dr. Ellen Li, and I are going to match this gift dollar for dollar. We will be writing a check for $21,614.55, making the total impact of this gift more than $43,000.” 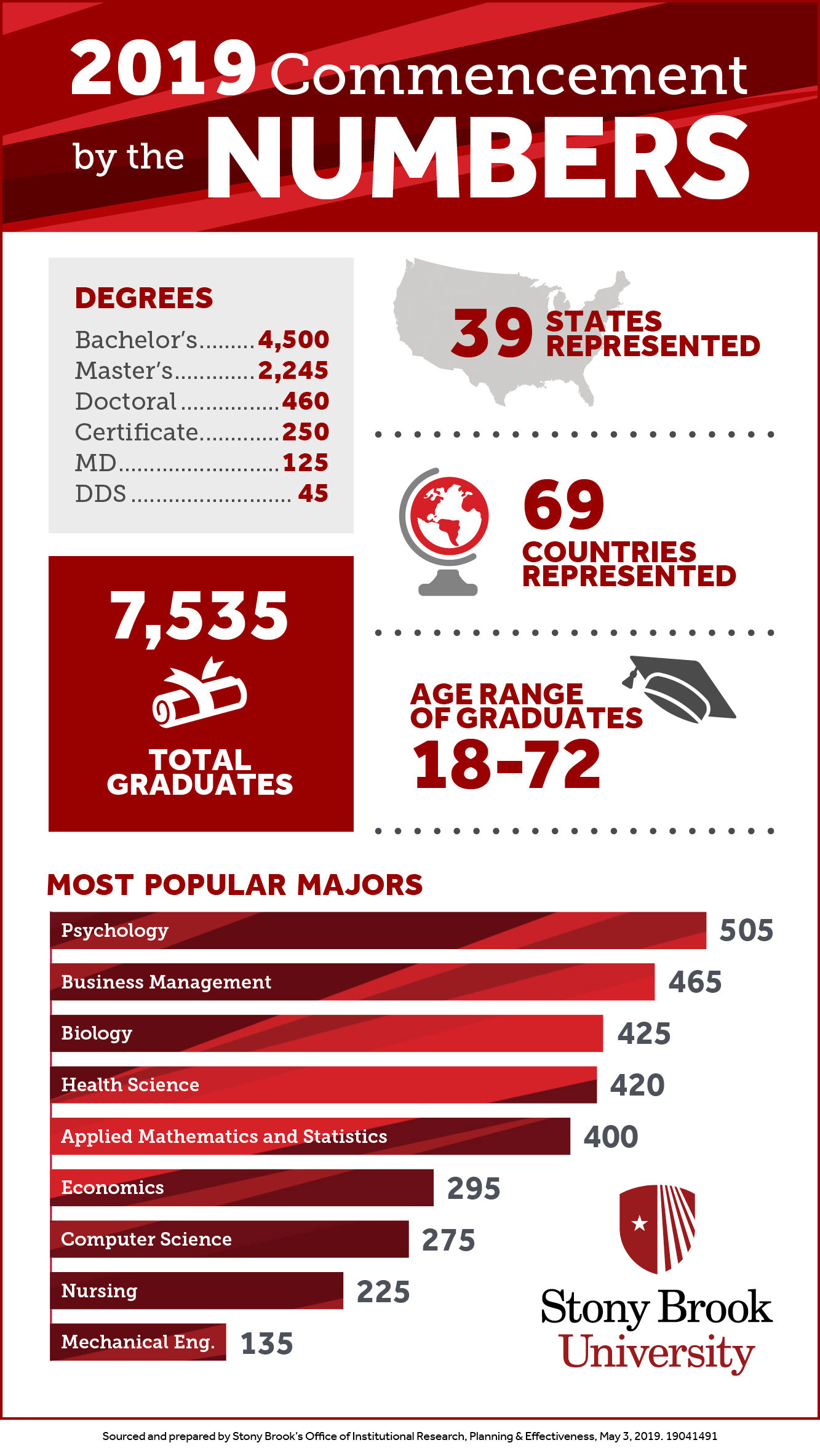 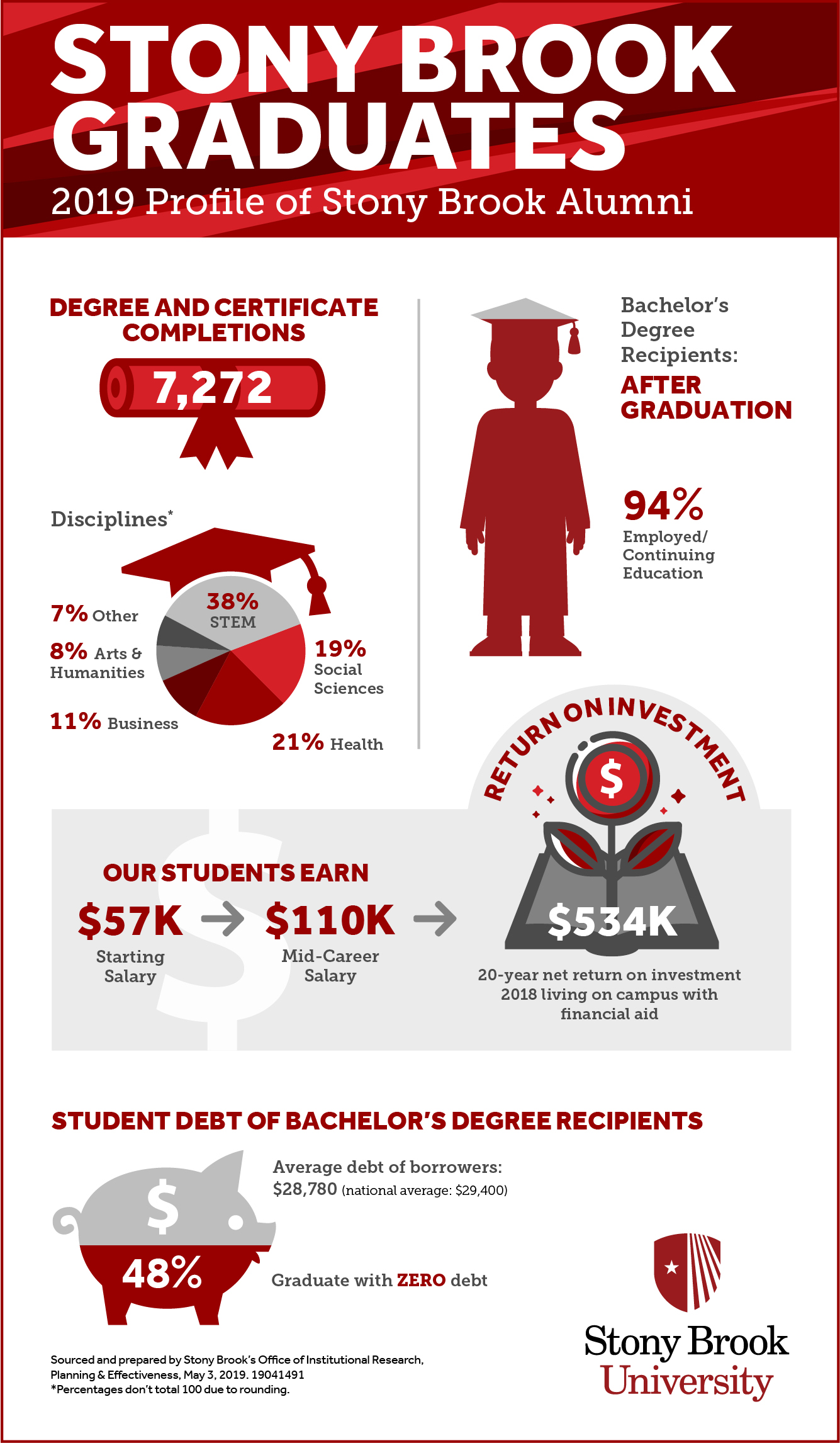