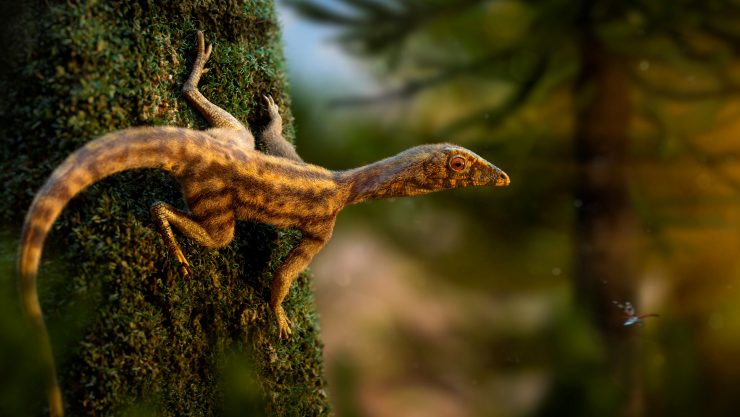 Pterosaurs are the first vertebrates to evolve powered flight and occupied the skies for over 150 million years during the Age of Dinosaurs. Ever since their fossil remains were first discovered in the 1700s, their origin and early evolution have been shrouded in mystery.

“Pterosaurs appear in the fossil record already showing that they were fully adapted for flight,” says Turner, Associate Professor in the Department of Anatomical Sciences in the Renaissance School of Medicine at Stony Brook University and study co-author. “This means they look really different from any of the other reptile groups at the time. That makes piecing together their evolutionary origins quite difficult.”

Collaborative field excavations by Dr. Turner and colleagues conducted over the last 15 years in Upper Triassic rocks exposed in Ghost Ranch, New Mexico provided key fossils for the study. One particularly important discovery was of a small dinosaur precursor, named Dromomeron. Dromomeron belongs to a group of dinosaur precursors called Lagerpetids.  Since the initial discovery, new lagerpetid bones have been discovered in North America, Brazil, Argentina, and Madagascar.

“Any one of these species alone wasn’t enough to solve the pterosaur puzzle,” explained Turner. “We needed to join information from our five different research groups spread across three continents to get all the pieces of this puzzle in place.”

When all the data were combined, the researchers combined cutting-edge micro-CT scans and 3D scanning of lagerpetid and pterosaur skeletal fossils to reveal previously unknown similarities in pterosaur and lagerpetid anatomy. Newly discovered skull and forelimb remains help tie lagerpetid skeletal features to those of early pterosaurs. Lagerpetids lack the limb adaptations for flight. But important and unique sensory features—such as the shape and size of the brain and inner ear—are shared with pterosaurs. These neurosensory data add to the compelling case for the relationship, and also indicate that these features evolved before flight.

“The new information about the origin of pterosaurs opens a completely new line of research that will seek to understand how these animals became the first vertebrates to acquire the capacity of active flight,” says Martín D. Ezcurra of the Museo Argentino de Ciencias Naturales “Bernardino Rivadavia” in Buenos Aires, Argentina, and study lead author.

“Although the exact transition between land-dwelling and flying vertebrates remains unknown,” notes Sterling J. Nesbitt, Associate Professor at Virginia Tech, and co-lead on the paper, “these findings shorten the temporal and anatomical gap between the oldest pterosaurs and their closest relatives.”

“It’s been exciting to be part of a team pushing forward our knowledge of Earth History and biological evolution,” says Turner. “Yet again we see how strong international collaboration and a long-term commitment to field exploration leads to key discoveries.”