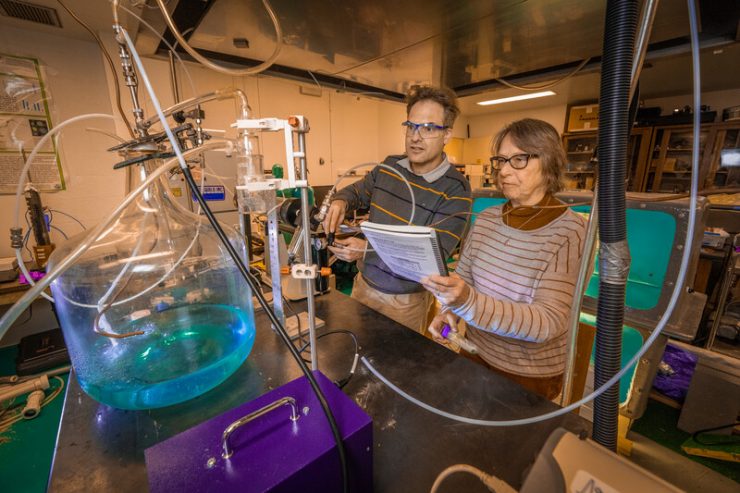 The experimental findings and ice crystal formation model, described in Science Advances, enhance the understanding of cloud formation and effects on climate

STONY BROOK, NY, November 2, 2022 – While there are several sources of ice forming particles in the atmosphere, sea spray aerosols (SSAs) are recognized as a significant source of ice-nucleating particles (INPs). But what SSAs are composed of, how they affect cloud formation, and how they may in turn affect climate, remains an outstanding and important question for atmospheric scientists. Now researchers at Stony Brook University have developed a way to simulate SSAs in laboratory tanks that mirror ocean conditions. This has allowed them  to determine the organic compounds associated with and released by growing marine microorganisms, and discover clues to the role of these compounds as INPs. They also studied the formation of ice, as in itself is a complex process and can be formed by various mechanisms. Their findings are detailed in a paper published in Science Advances.

Aerosols generated by winds blowing over the ocean surface and bubbles form sprays of fine salt particles coated with organic compounds which can be transported high up into the atmosphere where clouds form. They are among various other particle types including dust, soot, and ash from wildfires that contribute to ice formation in the atmosphere.

Oceans cover 70 percent of the planet with areas away from the continents where SSAs are the major contributors to INPs and cloud formation. For scientists to predict the formation of clouds and to assess their climatic impact, they first need to understand under which conditions ice crystals can form from particles originating from the largest source, the ocean.

Corresponding author Daniel Knopf, a Professor of Atmospheric Chemistry, and co-author Professor Josephine Aller, a microbial oceanographer in the School of Marine and Atmospheric Sciences (SoMAS) at Stony Brook University, and their research team simulated ocean water and generated ice forming SSA particles. They examined these and found that the SSA particles were made up of the metabolic products of microorganisms living near the ocean surface.

In the SoMAS Aerosol Research Laboratory at Stony Brook, SSA particles were produced in sealed simulation tanks to reproduce the conditions of the oceans. The airborne particles produced were used for their cloud formation experiments. Their experiments demonstrated that these particles produce ice crystals by two distinctively different pathways under typical atmospheric conditions – ice can form either by water vapor onto the SSA particles or from liquid SSA droplets.

“Our findings unambiguously link microbiological processes in ocean surface waters with cloud formation,” says Knopf. “The study revealed that the polysaccharides and proteins released by microorganisms serve as the nucleating agents in SSA particles. Therefore, we were able to identify on a molecular species level the organic matter that triggers ice nucleation.”

The team, Knopf said, could only achieve this discovery by examining in fine detail the composition of individual particles using X-ray microscopy technology at the synchrotron light source at the Lawrence Berkeley National Laboratory.

“This study not only identifies the ice nucleating agent but also provides the first holistic parameterization to predict freezing from SSA particles,” adds Aller. “This new parameterization includes immersion freezing, as the INP is engulfed in a liquid, usually water, and the deposition ice nucleation where ice forms on the INP without any visual water. Our new parameterization covers two freezing scenarios and can be applied in cloud-resolving and climate models to assess the climatic impact of ice crystal containing clouds.”

One region where this modeling of ice formation and clouds can help is in the Polar Arctic. Both Knopf and Aller say that the model may help to constrain the uncertainties when predicting how the polar regions will warm in the future – a region that is warming faster than other regions of the world.

Overall, the authors point out that the application of these new freezing process results, in combination with data from other studies, has led to a clearer model to describe how the ice forming process occurs and how it can be predicted knowing only temperature, humidity, and SSA particle size.

This research came about as a multidisciplinary investigation combining the analysis of the biochemistry of microbial organisms in ocean surface waters with cold cloud formation processes in the atmosphere.

The project was spearheaded by the Aller and Knopf research teams, which involved the work of three former Stony Brook University graduate students: Peter Alpert, the lead author, and now a research scientist at the Paul-Scherrer Institute in Switzerland; Wendy Kilthau, now at the Plum Island Animal Disease Center, and Bingbing Wang, now a professor at Xiamen University in China.