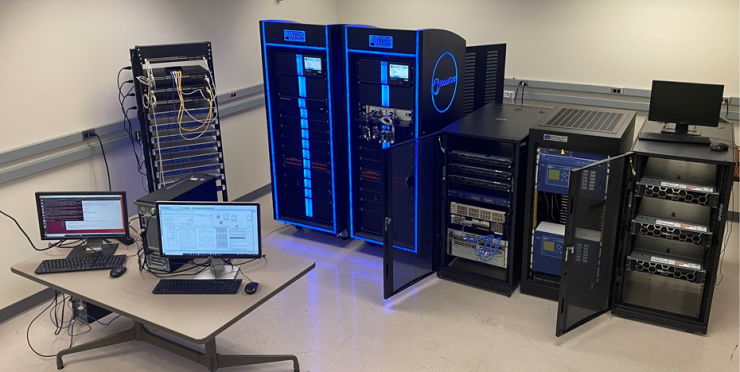 STONY BROOK, NY, September 20, 2021 – Ensuring the safety and reliability of our nation’s energy or power grids remains vital for society to function at all times. New techniques in artificial intelligence (AI) that may be applied to the power grid could hold the key to that. Stony Brook University Professor Peng Zhang, PhD, and collaborators in academia, industry, government and other entities in New York State statewide are advancing their research to develop “AI-Grid,” an AI enabled, autonomous grid designed to keep power infrastructure resilient from cyberattacks, faults and disastrous accidents.

The work is part of the National Science Foundation’s (NSF) Convergence Accelerator Program, which supports and builds upon basic research and discovery that involves multidisciplinary work to accelerate solutions toward societal impact. In September 2020, the Convergence Accelerator launched the 2020 cohort, which included AI-Grid as a phase 1 awardee and grant funding of a $1 million to further AI-Grid research from an idea to a low-fidelity prototype. The Convergence Accelerator recently selected teams for phase 2, to focus on expanding the solution prototype and to build a sustainability plan beyond the NSF funding. Under phase 2, a new $5 million NSF cooperative agreement will fund the AI-Grid project.

For more about the NSF’s $50 million investment for phase 2 work for 10 research teams nationally, including the one spearheaded by Stony Brook, see this news.

“This project led by Professor Zhang is a great example demonstrating the impact of this novel research on essential infrastructure that we rely on daily, and defines a pathway for enhancing the resiliency and security of our electrical grid systems,” says Richard J. Reeder, PhD, Vice President for Research at Stony Brook University.

“A convergence approach is essential to solving large-scale societal challenges, which is why the NSF Convergence Accelerator requires our funded teams to include a wide-range of expertise from academia, non-profits, industry, government, and other communities,” said Douglas Maughan, head of the NSF Convergence Accelerator program. “The merging of ideas, techniques, and approaches combined with human-center design concepts assists our teams in accelerating their ideas toward solutions within three years.”

“We expect to show that our AI-Grid solution is affordable, lightweight, secure and replicable, thus offering what could be unprecedented flexibility for an approach to transform today’s infrastructures into tomorrow’s autonomous AI-Grid,” says Zhang, Principal Investigator, SUNY Empire Innovation Professor in the Department of Electrical and Computer Engineering in Stony Brook’s College of Engineering and Applied Sciences (CEAS). “This project will demonstrate AI-Grid’s capability to empower our nation’s digital economic engines, relieve the pains of those communities suffering from high electricity costs, and knock out low energy reliability and poor resilience.”

According to Zhang, the program includes a broad multidisciplinary team of researchers and many academic and industry partnerships key to its success. Thus far the AI-Grid team has established more than 30 partnerships that include power utilities, independent system operators, local and state government, industry and university researchers. He says these partnerships have significantly advanced the technology involved in the work that now includes various deep learning methods, online distribution control, encrypted control, active fault management, and a fully programmable microgrid platform.

“The technologies that Peng and his team are developing come at a critical time as the nation pivots toward renewable energy and the inevitable impact it will have on the grid in the coming decade,” says Jon Longtin, PhD, Interim Dean of the CEAS. “This kind of multidisciplinary collaboration strengthens our research enterprise, while demonstrating to our students how complicated problems are solved in the modern world.”

For additional information about the AI-Grid initiative, research and partnerships, see this story.