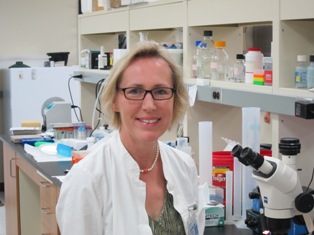 Dr. Ute Moll, Professor of Pathology, has uncovered a novel role for p53 in the development of ischemic stroke.

STONY BROOK, N.Y., June 22, 2012 – The gene p53 is the most commonly mutated gene in cancer. p53 is dubbed the “guardian of the genome” because it blocks cells with damaged DNA from propagating and eventually becoming cancerous. However, new research led by Ute M. Moll, M.D., Professor of Pathology at Stony Brook University School of Medicine, and colleagues, uncovers a novel role for p53 beyond cancer in the development of ischemic stroke. The research team identified an unexpected critical function of p53 in activating necrosis, an irreversible form of tissue death, triggered during oxidative stress and ischemia. The findings are detailed online in Cell.


Ischemia-associated oxidative damage leads to irreversible necrosis which is a major cause of catastrophic tissue loss. Elucidating its signaling mechanism is of paramount importance. p53 is a central cellular stress sensor that responds to multiple insults including oxidative stress and is known to orchestrate apoptotic and autophagic types of cell death. However, it was previously unknown whether p53 can also activate oxidative stress-induced necrosis, a regulated form of cell death that depends on the mitochondrial permeability transition pore (PTP) pore.

“We identified an unexpected and critical function of p53 in activating necrosis: In response to oxidative stress in normal healthy cells, p53 accumulates in the mitochondrial matrix and triggers the opening of the PTP pore at the inner mitochondrial membrane, leading to collapse of the electrochemical gradient and cell necrosis,” explains Dr. Moll. “p53 acts via physical interaction with the critical PTP regulator Cyclophylin D (CypD). This p53 action occurs in cultured cells and in ischemic stroke in mice. “

Of note, they found in their model that when the destructive p53-CypD complex is blocked from forming by using Cyclosporine-A type inhibitors, the brain tissue is strongly protected from necrosis and stroke is prevented.

“The findings fundamentally expand our understanding of p53-mediated cell death networks,” says Dr. Moll. “The data also suggest that acute temporary blockade of the destructive p53-CypD complex with clinically well-tolerated Cyclosporine A-type inhibitors may lead to a therapeutic strategy to limit the extent of an ischemic stroke in patients.”

“p53 is one of the most important genes in cancer and by far the most studied,” says Yusuf A. Hannun, M.D., Director of the Stony Brook University Cancer Center, Vice Dean for Cancer Medicine, and the Joel Kenny Professor of Medicine at Stony Brook. “Therefore, this discovery by Dr. Moll and her colleagues in defining the mechanism of a new p53 function and its importance in necrotic injury and stoke is truly spectacular.”

Dr. Moll has studied p53 for 20 years in her Stony Brook laboratory. Her research has led to numerous discoveries about the function of p53 and two related genes. For example, previous to this latest finding regarding p53 and stroke, Dr. Moll identified that p73, a cousin to p53, steps in as a tumor suppressor gene when p53 is lost and can stabilize the genome. She found that p73 plays a major developmental role in maintaining the neural stem cell pool during brain formation and adult learning. Her work also helped to identify that another p53 cousin, called p63, has a critical surveillance function in the male germ line and likely contributed to the evolution of humans and great apes, enabling their long reproductive periods.