The Future of Medicine Arrives: 124 Students Prepare for Careers in Primary Care and as Physician-Scientists 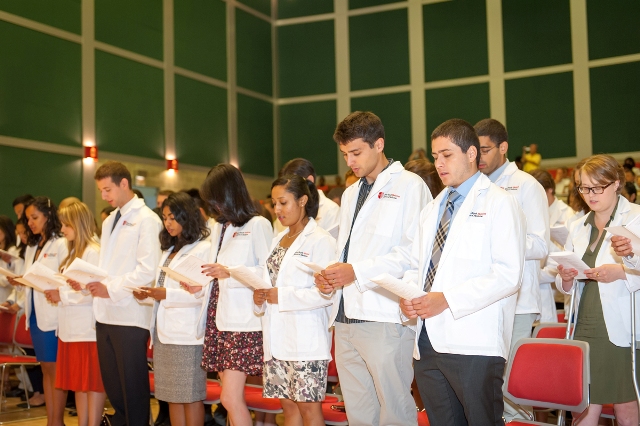 The Future of Medicine Arrives: 124 Students Prepare for Careers in Primary Care and as Physician-Scientists

STONY BROOK, N.Y., August 22, 2013 – The Stony Brook University School of Medicine Class of 2017 officially launched their medical training when all 124 incoming students received a physician-in-training white coat and took the Hippocratic Oath for the first time at the School’s annual White Coat Ceremony on Aug. 18.


With 77 percent of students from New York State, the Class of 2017 at Stony Brook will help address a critical doctor shortage in the state, including a shortage of primary care physicians. According to a 2012 Healthcare Association of New York State (HANYS) Physician Advocacy Survey, the state needs more than 1,200 new physicians.

“Donning the white coat marks the beginning of a career that is an honor and privilege, requires both hard work and taking on huge responsibilities, but yields immense personal gratification and growth,” said Kenneth Kaushansky, MD, MACP, Senior Vice President for the Health Sciences, and Dean, School of Medicine. “Soon you will experience many ‘firsts’: your first patient history, your first diagnosis of cancer, your first treatment plan, your first birth, and many others. All will shape your career as an outstanding and caring physician.”

Dr. Kaushansky and School of Medicine faculty characterized the Class as smart and equipped to take on the rigors of medical school in preparation to enter a profession where discoveries in medicine and opportunities in biomedical research are ever expanding. When classes begin on Aug. 26, the students will be on course to careers that fit the needs of 21st Century medicine – such as primary care providers and physician-scientists working on bench-to-bedside treatments.


Incoming students Opeyemi Ajibade, of Brooklyn, NY, and Jeremiah Joyce, a Michigan native, hope to change the physician landscape in the region and seek to improve the healthcare of underserved populations, possibly as primary care physicians.

“Underserved communities like my own in Brooklyn are plagued by inadequate funding, poor facilities and the inability of local hospitals to meet the growing healthcare needs of its residents,” said Ajibade, who graduated from Stony Brook with a BS in Health Science in 2009 and an MS in Physiology & Biophysics 2012. “I desire to work in an underserved community to provide these patients, many of whom suffer from an array of health issues, the preventive care and treatments they need.”

Nearly one-third of the 2013 Stony Brook School of Medicine graduates entered primary care residency training programs, and Joyce hopes to follow in their path. “Right now I am most interested in primary care, specifically family medicine, and I have a strong curiosity about both rural and family medicine and infectious diseases work in the developing world,” he said.

The Association of American Medical Colleges (AAMC) estimates the national need for primary care practitioners will increase by 15,000 over the next five years. The need for more physicians and primary care specialists is growing as the U.S. population is aging, and nearly one-third of physicians are expected to retire within a decade, while an estimated 32 million people will enter the healthcare system in 2014 because of the Affordable Care Act.

The Class of 2017 will have ample opportunities to test their skills in primary care, beginning with first-year training in the Clinical Skills Center then clinical rotations at Stony Brook and other hospitals on Long Island further into their medical school training.

Agatha Lyczek, the daughter of Polish immigrants, wants to pursue a career as a physician-scientist combining neuroscience research with an interest in imaging and regenerative medicine.

“I believe a career as a physician-scientist is most fitting for me because I am deeply interested in clinical practice as well as scientific discovery,” said Lyczek, one of six incoming students to enroll in Stony Brook’s MD/PhD program.  She is also interested in global health, an area in which opportunities for research and clinical training in developing countries in Africa, Asia, and Latin America, have increased in recent years for Stony Brook medical students.

Another student on a research path is Brent Penque, who received his PhD from Indiana University in Cellular & Integrative Physiology in 2012.

“I studied the underlying mechanisms fueling diabetes progression at a cellular level, something that could be applied to translational medicine,” said Penque. “My experience has led me to appreciate bench-to-bedside care, and I chose Stony Brook because of the enthusiasm by the faculty and student body in this area,” explained Penque, who plans to complete an Internal Medicine residency following medical school and a fellowship in Endocrinology.

Sloane Heller, who graduated from Yale University with a BS in Psychology in 2012, will focus specifically on a disease that most often strikes the elderly – Alzheimer’s disease. She spent the 2012-13 academic year in Madrid working on an Alzheimer’s initiative under a Fulbright grant.  “My goal is to become an Alzheimer’s disease physician, to work comprehensively with patients and families throughout the course of the disease,” said Heller.

In 2013 the School of Medicine received an all-time high of 5,196 applicants. Among the 124 incoming students, their cumulative grade point average is 3.7 on a scale of 4.0. Among the 61 undergraduate programs they attended, Stony Brook University was the top program attended (19), followed by Cornell University, New York University, and the University of Rochester, with five students from each, respectively.

Held at Stony Brook since 1998, the white coat ceremony is an initiation rite for incoming medical students at established medical schools around the country. The white coat is symbolic to medicine as a profession based on professionalism, scientific excellence, responsibility, and compassionate care.

Established in 1971, the Stony Brook University School of Medicine includes 25 academic departments. The three missions of the School are to advance the understanding of the origins of human health and disease; train the next generation of committed, curious and highly capable physicians; and deliver world-class compassionate healthcare. As a member of the Association of American Medical Colleges (AAMC) and a Liaison Committee on Medical Education (LCME) accredited medical school, Stony Brook is one of the foremost institutes of higher medical education in the country. Each year the School trains nearly 500 medical students and more than 480 medical residents and fellows. Faculty research includes National Institutes of Health-sponsored programs in neurological diseases, cancer, cardiovascular disorders, biomedical imaging, regenerative medicine, infectious diseases, and many other topics. Physicians on the School of Medicine faculty deliver world-class medical care through more than 30,000 inpatient, 80,000 emergency room, and approximately 350,000 outpatient visits annually at Stony Brook University Hospital and affiliated clinical programs, making its clinical services one of the largest and highest quality on Long Island, New York. To learn more, visit www.medicine.stonybrookmedicine.edu.