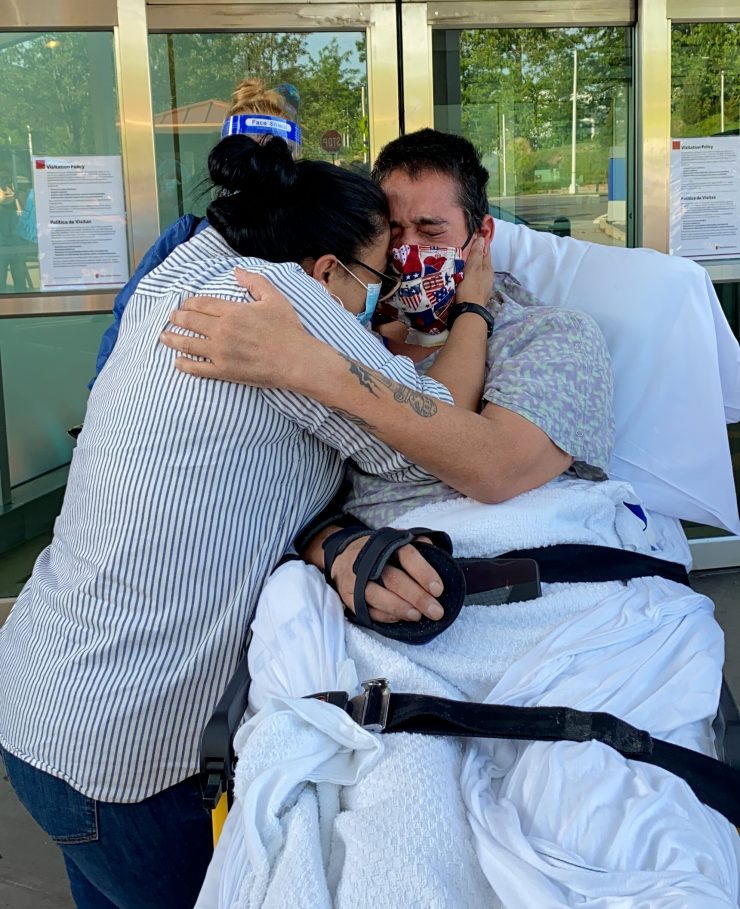 A 48 year old veteran is now on the road to recovery after being placed on a ventilator for 7 weeks due to the coronavirus. After visiting both an urgent care and an outside hospital with no improvement, Gary Degrijze of Bellport was admitted to Stony Brook University Hospital on March 22.

“It was getting harder and harder to breathe,” he said. That night Gary was placed on a ventilator. “It was lights out. I don’t remember anything that happened while I was intubated for about two months.”

Jerry Rubano, MD, Trauma/Acute Care/Surgical Critical Care in the Department of Surgery at Stony Brook Medicine cared for Gary the majority of his time at Stony Brook University Hospital.

“Gary had an exceptionally rocky course. He’s one of those people who’s really not just lucky to be here, but it’s kind of incredible that he’s still alive and doing as well as he is after all he’s been through,“ said Dr. Rubano. “When he was in the ICU, he lost his pulse at least two times. His ventilator was on salvage mode. His kidneys stopped working for about a month where he was on continuous dialysis and his lungs were probably some of the worst that we’ve seen. He was as sick as can be.”

Dr. Rubano and his team were in constant contact with Gary’s family giving them daily updates on his condition.

“I didn’t have to wait for them to call,” said Ana Degrijze. “I had a nurse calling me every day after the rounds were done. I thought that was so great.” This process was started in Gary’s unit by Stony Brook’s Trauma Program Manager Jane McCormack. She rounded with doctors each day to be able to give families accurate and timely updates daily.

“People started using the technology we take for granted to reconnect families,” said Dr. Rubano. “It was pretty emotional seeing these reunions, a wife or husband getting to see their loved one after such a long time.”

When Gary couldn’t see his loved ones in person, he at least had a team of people at Stony Brook supporting him.

“The nursing staff and doctors we’re like longtime friends,” said Gary. “I can’t even begin to explain what it was like to have them by my side.”

Gary is now in rehab where he hopes to regain motion in arms lost while on the ventilator. His goal after recovery, to be able to serve another 5 years in the Army Reserve and retire after 20 years of service.

“Gary has truly made a remarkable recovery,” says Dr. Rubano. “His determination and the dedication of the team taking care of him have made all the difference.”