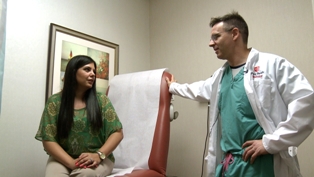 
STONY BROOK, N.Y., September 24, 2013 – When Angela Trivigno, 37, of Nissequogue, was having headaches and pain behind her left eye she thought her allergy symptoms had intensified, but the dance instructor and mother of two played it safe and went to walk-in clinic. It ended up she had a brain aneurysm. She was referred to David Fiorella, MD, PhD, a cerebrovascular specialist at Stony Brook Medicine’s Cerebrovascular and Stroke Center. Fast forward two days later: Dr. Fiorella performed a balloon-assisted technique to completely cut off her brain aneurysm, thus averting a life-threatening rupture. Angela was back to work several days later and feeling fine.

September is National Brain Aneurysm Awareness Month. According to the National Institute of Neurological Disorders and Stroke, a brain or cerebral aneurysm, a weak area in brain blood vessel that usually enlarges, can occur in anyone and also rupture at any time to cause bleeding in the brain. Approximately 1.5 to 5 percent of the U.S. population has or will develop a cerebral aneurysm. The incidence of reported rupture is about 30,000 individuals per year in the U.S.

Dr. Fiorella viewed the initial MRI results of Angela’s brain before she came to Stony Brook. He performed more additional detailed imaging – an angiogram. The angiogram results indicated a larger aneurysm (6 millimeters) than indicated by MRI. Based on the angiogram and Angela’s symptoms, Dr. Fiorella recommended a minimally invasive procedure he could perform through her femoral artery to remove the aneurysm.

“We used a new type of balloon catheter with a design that enabled me to block off her aneurysm without having to implant a stent,” said Dr. Fiorella. “The stability and superior navigability of a new balloon catheter aided the coiling process, which isolated the aneurysm from normal brain circulation. The procedure resulted in a complete repair of her aneurysm.”

Stony Brook is one of only a few sites in the United States specializing in balloon assisted techniques for the treatment of complex and wide-necked aneurysms.

“Angela had no issues during or following the procedure and while she requires follow-up, we expect that she is completely cured,” summarized Dr. Fiorella, four months after Angela’s April 2013 procedure. She will have one more follow-up this year with Dr. Fiorella in October.

“I have no headaches, no eye pain, and the fatigue that I felt at that time is no longer an issue,” said Angela, a dance instructor and co-founder of the North Shore Performing Arts Center in Syosset. “I feel great and am back to working six days a week and taking care of my two young children. Plus, I no longer have to think about the aneurysm and make a decision on what to do about it.”

This fall Angela says she is busier than ever, as her son, Drew, entered pre-school and her daughter, Sophia, first grade. At the North Shore Performing Arts Center, activities and dance instructions have accelerated and Angela is preparing for the upcoming auditions for the Center’s new competition team and holiday showcases and performances.

Dr. Fiorella has treated other Long Islanders like Angela Trivigno as well as patients with difficult-to-treat aneurysms referred to Stony Brook from all over the United States. Dr. Fiorella and his partner Dr. Henry Woo, Co-Director of the Cerebrovascular and Stroke Center, treat more than 100 patients with brain aneurysms each year. Many of these cases involve complex and or/or large aneurysms. Techniques to treat these include endovascular therapies such as coiling and open surgical “clipping” of aneurysms.

Stony Brook University Cerebrovascular and Stroke Center (CVC) has a dedicated team with the expertise needed to diagnose and treat a wide range of cerebrovascular diseases. The Center offers a multidisciplinary team of neurologists, interventional neuroradiologists and cerebrovascular neurosurgeons who are committed to excellence in patient care, research, and education. The CVC uses a multidisciplinary, team-based approach, state-of-the-art facilities and equipment, and the latest surgical and minimally invasive techniques to accurately diagnose and treat cerebrovascular disorders. State-of-the-art facilities include high-speed computed tomography (CT), MRI, biplane angiography equipment and a new $14 million cerebrovascular biplane suite. To learn more, visit www.neuro.stonybrookmedicine.edu.