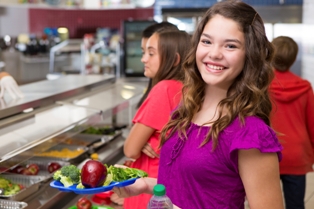 Research based on data from interviews with 13,284 adolescents nationwide

STONY BROOK, NY, June 20, 2013 — Well-rested teenagers tend to make more healthful food choices than their sleep-deprived peers, according to a study led by Lauren Hale, PhD, Associate Professor of Preventive Medicine at Stony Brook University School of Medicine. The finding, presented at SLEEP 2013, the annual meeting of the Associated Professional Sleep Societies, may be key to understanding the link between sleep and obesity.

“Not only do sleepy teens on average eat more food that’s bad for them, they also eat less food that is good for them,” said Dr. Hale, speaking about the study results. “While we already know that sleep duration is associated with a range of health consequences, this study speaks to some of the mechanisms, i.e., nutrition and decision making, through which health outcomes are affected.”

The study, which was supported by the National Institute of Diabetes and Digestive and Kidney Diseases, examined the association between sleep duration and food choices in a national representative sample of 13,284 teenagers in the second wave of the National Longitudinal Study of Adolescent Health. The data were collected in 1996 when the interview subjects had a mean age of 16 years.

The authors found that those teens who reported sleeping fewer than seven hours per night — 18 percent of respondents — were more likely to consume fast food two or more times per week and less likely to eat healthful food such as fruits and vegetables. The results took into account factors such as age, gender, race and ethnicity, socioeconomic status, physical activity and family structure, and found that short sleep duration had an independent effect on both healthy and unhealthy food choices.

“We are interested in the association between sleep duration and food choices in teenagers because adolescence is a critical developmental period between childhood and adulthood,” said the first author of the study, Allison Kruger, MPH, a community health worker at Stony Brook University Hospital. “Teenagers have a fair amount of control over their food and sleep, and the habits they form in adolescence can strongly impact their habits as adults.”

Dr. Hale said that one of the next steps in the research will be to explore whether the association between sleep duration and food choices is causal.

“If we determine that there is a causal link between chronic sleep and poor dietary choices, then we need to start thinking about how to more actively incorporate sleep hygiene education into obesity prevention and health promotion interventions,” she said.