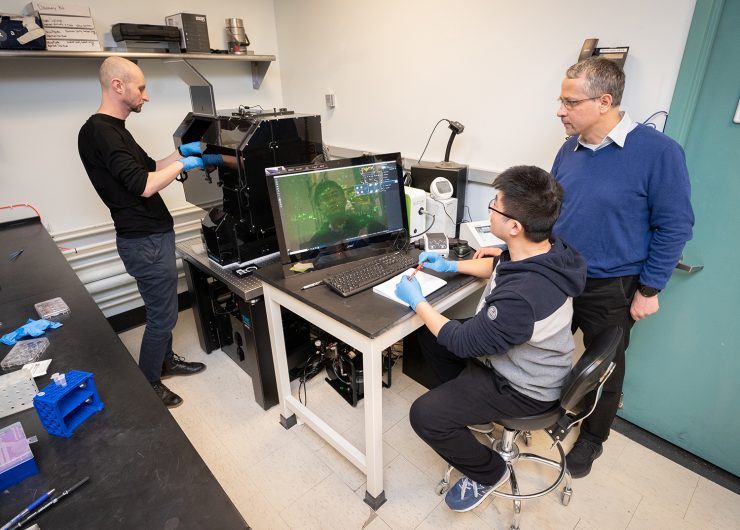 STONY BROOK, NY, June 22, 2022 – Gábor Balázsi, PhD, and his research team in the Laufer Center and the Department of Biomedical Engineering at Stony Brook University are embarking upon a new way to research cells, the building blocks of life and often triggers to disease when their behavior changes.

Balázsi’s laboratory develops predictive, quantitative understanding of biological processes such as cellular decision making and the survival and evolution of cell populations. Recently they acquired a novel instrument to analyze cells called the FluidFM OMNIUM. The laboratory is one of only a few in the United States to incorporate this instrument into research on cell systems. The FluidFM system enables the team to take cellular research to the most direct level possible – precisely injecting and removing fluids, as well as pushing, pulling and relocating single living cells.

“This instrument places our laboratory on the front line of single cell research approaches,” says Balázsi, the Henry Laufer Professor in The Louis and Beatrice Laufer Center for Physical & Quantitative Biology, Professor of Biomedical Engineering, and member of the Stony Brook Cancer Center. He believes this type of research on cells is essential for advancing 21st Century medicine.

“Millions of cells in our tissues contain billions of molecules. Central to the molecules is DNA storing vital information in protein-coding genes. Yet, how these genes influence the behavior of individual cells and thereby cell populations is not completely understood,” says Balázsi.

The FluidFM system was developed from a series of technological discoveries and innovations, leading to what is to this point an unparalleled capability for repeated, single live cell-specific, direct intra-cytoplasmic or intra-nuclear delivery and extraction of fluids of cells, as well as nondestructive single cell manipulation.

The Balázsi lab uses FluidFM to precisely modify the genome of individual cells and to select, place and study individual cells. The system will enable the researchers to examine, engineer and control single living cells of multiple types of cell lines related to cancer development.

The cost for FluidFM OMNIUM was covered by supplemental funds to a National Institute of General Medical Sciences (NIGMS) MIRA grant (number R35GM122561). In addition to the NIGMS grant, the Office of the Provost, the Laufer Center, the Office of the Vice President for Research and the Office of the Dean for the College of Engineering and Applied Sciences at Stony Brook University each contributed to acquiring the instrument.

“Ultimately if you understand cell populations based on what single cells do, that teaches us a lot about many diseases and how collective cell behaviors emerge in the disease process,” stresses Balázsi.

He projects that future research using FluidFM in his lab and elsewhere may focus on a wide array of medical research, such as applications in bioengineering, stem cell engineering, genome modification, and the issue of genetics and aging.