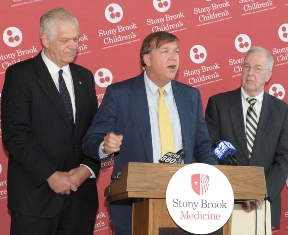 Stony Brook University President Samuel L. Stanley Jr., center, joins Assemblyman Steve Englebright (D-Setauket), left, and Sen. Kemp Hannon (R-Garden City) in announcing legislation that requires all New York hospitals to offer the pertussis vaccine to all parents of newborns starting in January 2013. The legislation was based on research conducted in 2008 by Shetal Shah, M.D., neonatologist with Stony Brook Long Island Children’s Hospital, who advocated for the law to Hannon and Englebright.


STONY BROOK, N.Y. – Aug. 2, 2012 – A New York State law will soon require hospitals across the state to offer the pertussis vaccine to parents of newborns, thanks to legislation that resulted from advocacy efforts by Shetal Shah, M.D., a neonatologist at Stony Brook Long Island Children’s Hospital who published research demonstrating that the approach can boost immunization rates.

Based on research he conducted and published in 2008 in the journal Pediatrics, Dr. Shah, Associate Professor of Pediatrics at Stony Brook University School of Medicine, advocated for the law to Hannon and Englebright. The legislation was signed by Gov. Cuomo on July 18 and takes effect Jan. 18, 2013.

“As a biomedical researcher of infectious diseases who knows the power of vaccines,
I knew a lot of people would benefit when Governor Cuomo signed this bill into law,” said Samuel L. Stanley Jr., Stony Brook University President. “I deeply appreciate all of the hard work of Senator Hannon and Assemblyman Englebright and so many others here at Stony Brook – particularly Dr. Shah – who helped make this law a reality.”

Dr. Shah’s research showed that when parents in the hospital were offered the pertussis vaccine, they were not only receptive to the idea, they were eager to receive it, he said. As a result, vaccination rates improved. The study showed that the best time to offer the vaccine to parents is while the mother is still hospitalized, soon after delivery.

Dr. Shah followed his own model for success in passing a similar bill in 2009 to require hospitals with Neonatal Intensive Care Units to offer flu vaccine to parents and family members of newborns being treated in NICUs statewide.

“Dr. Shah has shown true leadership and persistence in advocating for passage of this bill,” said Margaret M McGovern, MD, PhD, Professor and Chairman, Department of Pediatrics, Stony Brook University School of Medicine, and Physician-in-Chief, Stony Brook Long Island Children’s Hospital. “He has advocated for a common-sense solution that will be effective in raising the immunization rates for parents and other caregivers across the state.”

“Whooping cough is a disease that we thought vaccines had banished,” Assemblyman Englebright said. “When Dr. Shah approached me in February I learned otherwise. This disease is resurging because the vaccine is not permanent. Dr. Shah’s suggestion for a new law to offer vaccines to parents and caregivers is brilliant, timely, and effective. I’m grateful to all who responded to Dr. Shah’s request for action as this will save the lives of newborns.”

“Because of the high risk to newborns, every precaution should be taken to ensure their safety,” said Senator Hannon, Chair of the Senate Committee on Health. “By requiring that vaccinations be offered to parents and caregivers of newborn children, New York is taking the lead in ensuring these vulnerable babies are protected from this potentially fatal malady. I am pleased the Governor has signed my bill into law.”

“Whooping cough can be very dangerous, and often fatal, for newborns,” said Richard N. Gottfried, Chair of the Assembly Committee on Health. “Helping parents, relatives, and caregivers get vaccinated against whooping cough reduces the exposure of newborns, whose immune systems are not able to handle the vaccine.”

According to the Centers for Disease Control, New York currently ranks third in the number of reported cases nationally. Statewide, 1,288 cases have been reported – three times the number from 2011. There have been 187 cases in New York City and 333 on Long Island, and an outbreak of pertussis occurred in Northport earlier this year.

Nationally, the Centers for Disease Control on July 19 reported 18,000 cases of whooping cough nationwide – more than twice the number at the same point last year. By comparison, in the 20th century, the number of cases reported in the United States annually had dropped as low as 1,000. At the current rate, the number of cases for the year will be the highest since 1959, when 40,000 illnesses were reported. Nine children have died so far this year.

Pertussis is highly communicable, with a secondary attack rate of 80 percent among susceptible household contacts, said Sharon Nachman, MD, Professor of Pediatrics, Stony Brook University School of Medicine, and Division Chief, Pediatric Infectious Diseases, at Stony Brook Children’s. “This vaccine is approved not just for children and adults but also for pregnant women in their second and third trimester, since it is from these unvaccinated or under vaccinated family members that infants can get pertussis,” Dr. Nachman said. The new law not only will help New York avoid breakthrough episodes of pertussis in the general population, it will reduce healthcare costs by avoiding costly treatment of pertussis in newborns.

Experts believe whooping cough occurs in cycles and peaks every three to five years. The current epidemic rate has been linked to the effectiveness of the vaccine, which was modified in the late 1990s following concerns about rashes, fevers and other side effects. While the new version is considered safer, it is possible it isn’t as effective long term, the CDC says.

Parents and caregivers of newborns need to be aware that the pertussis vaccine is short-lived and can wear off within a decade, Dr. Shah said, so some people who were immunized as children are no longer protected in adolescence or adulthood. Health officials are calling on all adults to get a booster shot as soon as possible – especially pregnant women and adults who spend time around children. The government recommends that children get vaccinated in five doses, with the first shot at age 2 months and the final one between 4 and 6 years. A booster shot is recommended around 11 or 12.