MicroRNA-based Therapy May Be New Weapon to Combat Cancer 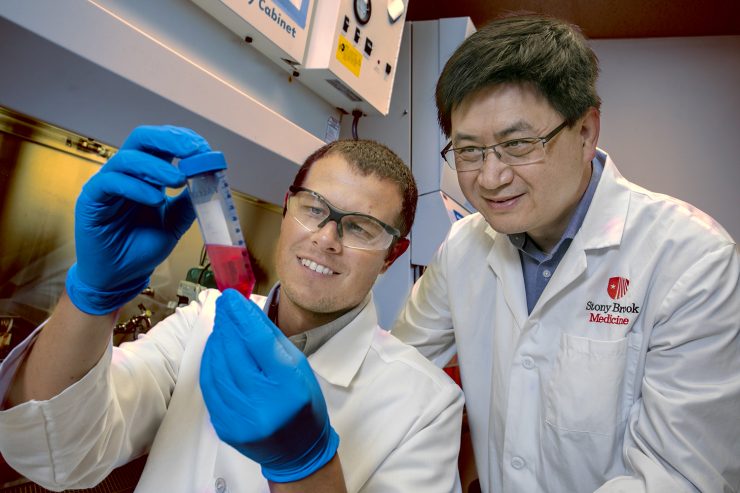 STONY BROOK, NY, September 18, 2019 – A technology that manipulates microRNAs (miRNAs) developed by Jingfang Ju, PhD, a biochemist and Professor in the Department of Pathology at the Renaissance School of Medicine at Stony Brook University, and colleagues has shown promise when used as anti-cancer therapeutic. The method may prove to be particularly effective against chemotherapy resistant cancers such as colorectal cancer. To advance the science of this method and develop miRNA-based drugs, the technology has been licensed to Curamir Therapeutics Inc., a biotechnology company, through an agreement with the Research Foundation of the State University of New York.

Dr. Ju and colleagues have studied the relationship between miRNAs and cancer at Stony Brook for more than 10 years. The role of miRNAs is to regulate protein synthesis and allows cells to rapidly adopt to their environment, such as the introduction of cancer chemotherapy agents. As a whole, miRNAs promote, or hinder, cellular processes that fight cancer. Certain miRNAs function as tumor suppressors. Dr. Ju and his team have identified multiple miRNAs that function as tumor suppressors in cancer. When cancer occurs, these miRNAs cease to function properly due to abn

ho has been studying chemotherapy resistance and miRNAs for 25 years. “From that we have created a miRNA drug development platform technology that is designed to treat chemotherapy-resistant colorectal cancer, and potentially for other forms of cancer such as pancreatic, gastric, lung and breast.”

Most chemotherapy compounds are effective in eliminating the rapidly proliferating cancer cells. A key aspect to the miRNA drug platform is that it is also designed to eliminate cancer stem cells that are resistant to therapy. This strategy theoretically will be more effective to eliminate all tumor cells to prevent resistance.

One example of the drug platform is Dr. Ju’s work with a specific modified tumor suppressor miRNA, miR-129 mimic.

In colorectal cancer, resistance to 5-Fluorouracil (5-FU), a standard drug to treat the disease, occurs frequently and often results in metastatic and deadly outcomes. When Dr. Ju and colleagues modified this miRNA and developed a mimic miR-129, treatment of advanced disease radically improved and chemotherapy resistance of the colorectal cancer stem cells reduced or was eliminated.

“In a narrow sense, we are developing new drugs to combat 5-FU resistance in colorectal cancer. While this is important, in the wider sense the miRNA-based drug platform is shown to eliminate cancer stem cells – which are intrinsically resistant to all chemotherapeutic agents – so the application to chemotherapy resistance is potentially broad,” says Dr. Ju.

One other aspect to the potential advantages of this therapeutic approach, adds Dr. Ju, is that no toxicity was shown by delivering the miRNA-based drugs in laboratory models. Most nucleic acid based drugs rely on various delivery vehicles which often time associated with toxicity. He explains that these particular miRNA mimic compounds do not require delivery vehicles to enter cancer cells and therefore reduce toxicity.