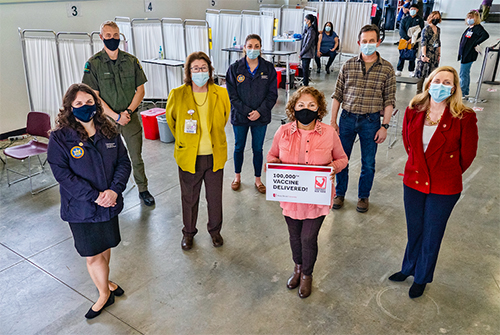 STONY BROOK, NY, March 23, 2021— In the race to get America vaccinated against COVID-19, Stony Brook University is celebrating the 100,000th shot at the Point of Distribution (POD) center, which is located at the University’s R&D Park and is part of the network of state-run vaccination sites established by Governor Cuomo. The POD has been up-and-running since January 18.

“As we administer our 100,000th COVID vaccine here at Stony Brook University’s R&D Center, I am proud of our accomplishments as the largest state-run Point of Distribution vaccination site in Suffolk County. We will continue this effective partnership with Governor Cuomo and New York State to end the COVID battle and close this chapter of the pandemic era,” says Maurie McInnis, President of Stony Brook University.

Through this pandemic, Stony Brook University and Stony Brook Medicine personnel have played a critical role in working alongside the Department of Health and New York State — with testing protocols, excess hospitalization plans and, now, the vaccine rollout.

Widely regarded as a flagship campus for the State University of New York (SUNY) system, Stony Brook University is bringing the full strength of its leadership, expertise, resources and quality care to further New York State’s goal of delivering life-saving vaccines to those who need it most.

The State also turned to Stony Brook Medicine to assist in successfully developing community PODs as pop-up sites in underserved communities on Long Island, to reach communities of color and the elderly, as well as help build trust, recognizing that the vaccine is one of the best ways to protect ourselves, our families and our communities from this serious infectious disease.

About Stony Brook University
Stony Brook University, widely regarded as a SUNY flagship, is going far beyond the expectations of today’s public universities. With more than 26,000 students, 2,700 faculty members, over 200,000 alumni, an academic medical center and 18 NCAA Division I athletic programs, it is one of only four University Center campuses in the State University of New York (SUNY) system. The University embraces its mission to provide comprehensive undergraduate, graduate, and professional education of the highest quality, and has been ranked among the top 35 public universities in the nation by U.S. News & World Report. Fostering a commitment to academic research and intellectual endeavors, Stony Brook’s membership in the Association of American Universities (AAU) places it among the top 65 research institutions in North America. The University’s distinguished faculty have earned esteemed awards such as the Nobel Prize, Pulitzer Prize, Indianapolis Prize for animal conservation, Abel Prize and the inaugural Breakthrough Prize in Mathematics. Part of the management team of Brookhaven National Laboratory of the U.S. Department of Energy, Stony Brook is one of only eight universities that has a role in running a national laboratory. Providing economic growth for neighboring communities and the wider geographic region, the University totals an impressive $7.23 billion in increased economic output on Long Island. Follow us on Facebook (https://www.facebook.com/stonybrooku/) and Twitter (@stonybrooku).